City Hall extends PP curfew for another week till May 27 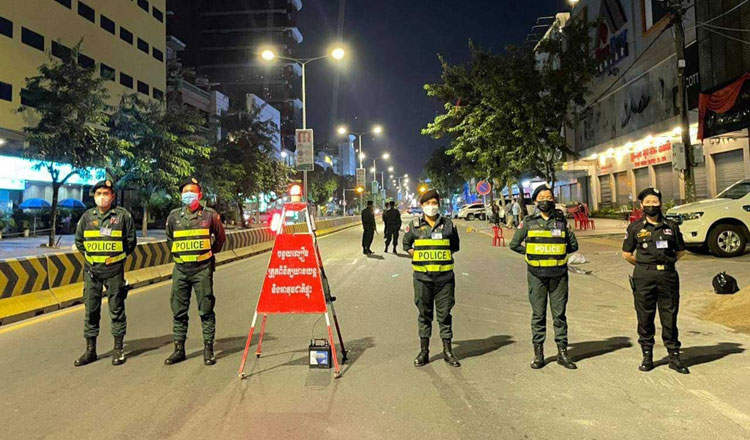 Page 1 pix A police roadblock at Mao Tse Toung Blvd in the capital during curfew hours on Wednesday. KT/Pann Rachana 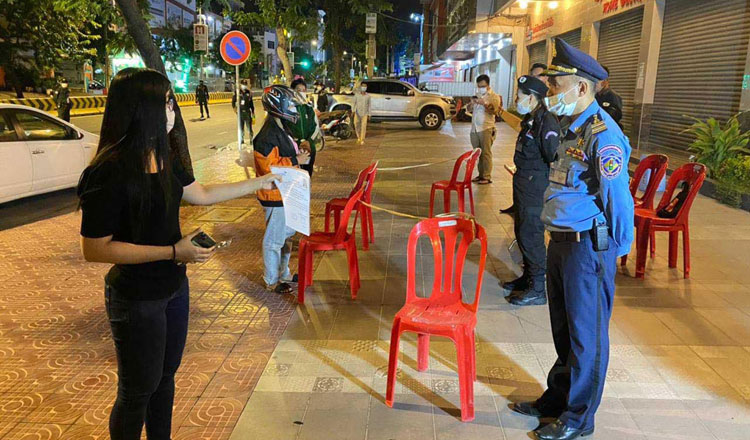 A woman shows a letter permission to travel during curfew hours to police along Mao Tse Toung Blvd in Phnom Penh. KT/Pann Rachana

Phnom Penh City Hall has decided to extend the capital-wide curfew for the seventh week in a row until May 27 to curb the spread of Covid-19.

It is also extending the ban on alcoholic drinks sales and large gatherings while emphasising the need to follow health measures put in place by the government and Health Ministry.

However, to ease the burden of long-suffering residents, the City Hall has decided to reopen large public markets from May 24 with strict health measures put in place.

Small markets such as temporary ones, those in factories and markets surrounding hospitals will remain closed.

Phnom Penh Governor Khuong Sreng said yesterday that it is necessary to keep the curfew until the number of new Covid-19 cases have been greatly reduced.

He also warned that stricter measures will be taken against curfew violators.

“The next step is to have stricter enforcement of the curfew and all those who travel between 8pm and 3am must be stopped, detained and fined without being let off with a warning,” he said.

“Our move to strictly implement fines is not because we want to ‘extort’ money from the public. It is to make sure that people follow the measures in place to prevent any further spread of the coronavirus,” he added.

Sreng noted that most people have followed curfew and lockdown measures with a high sense of responsibility, but there is still a small number of people who do not pay attention and refuse to cooperate with the authorities.

City Hall will also strictly monitor people’s adherence to lockdown measures at individual premises which are in high risk of spreading the virus in former Red Zones which have been re-designated as Orange Zones.

On the reopening of some markets, Sreng said all public market committees and vendors must work together to implement health measures to prevent the spread of Covid-19.

“If we find markets with positive Covid-19 infection, we will suspend them again,” he said.

In Kandal province, governor Kong Sophorn yesterday ended the lockdown in Takhmao city. There are no longer any Yellow or Orange zones.

Sophorn said that in case there is suspicion of a Covid-19 outbreak in any part of the city, the authorities will seal off the high-risk premises.

He also issued a decision to temporarily suspend all markets in Takhmao city to prevent the spread of the coronavirus for a week from yesterday to May 27.

Kandal Provincial Administration is also continuing the ban on alcoholic drinks and prohibition of dine-in customers in restaurants and other food outlets. Only delivery and takeaway services are allowed.

In another development, the Banteay Meanchey Provincial Administration reported yesterday there were 146 new cases of Covid-19 and 93 recoveries.

Roeun Sothy, a spokesman for the provincial health department, told Khmer Times that all the new cases were found in Poipet city where health officials are carrying out rapid testing for the virus.

Provincial authorities called on residents who have had direct or indirect contact with the patients to go for a sample test and quarantine themselves at home.

Banteay Meanchey Provincial Administration has also decided to end a curfew imposed on Serei Saophorn city from May 22.

Takeo provincial administration identified 41 new cases, most of whom are factory workers and migrant returnees from Thailand.

In order to prevent the spread of Covid-19, the Provincial Administration has called on traders and residents who have had direct contact with patients to report to local authorities immediately and go for sample testing at the nearest hospital. They should also quarantine for 14 days in accordance with the instructions of the Ministry of Health.

The administration had on Wednesday ordered the provincial health department to take samples of 612 garment factory workers and 52 of them tested positive.

The provincial health department has sent these patients for treatment at the Mekong Hospital and is tracing those who have had direct or indirect contact with them.

Meanwhile, the Ministry of Health yesterday reported 415 new cases of Covid-19, bringing the total number in the Kingdom to 23,697. Of the new cases, four were imported and the rest are linked to the February 20 Community Event.

At the same time, the ministry recorded 745 new recoveries; bringing the total number in the Kingdom to 15,700.

The ministry also announced that five more people had died from Covid-19, bringing the total number of fatalities to 164.