ICAPP: “The Delegation Believes the Election was Peacefully Conducted in a Free, Fair, Transparent and Inclusive Manner” 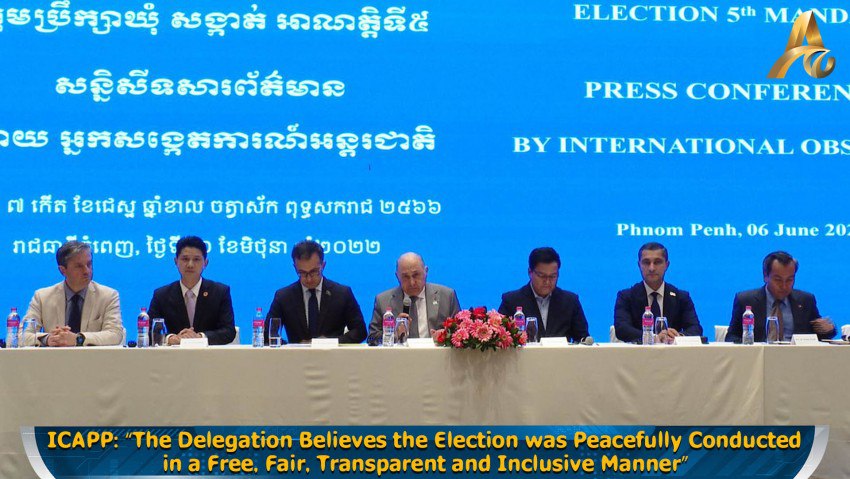 ICAPP: “The Delegation Believes the Election was Peacefully Conducted in a Free, Fair, Transparent and Inclusive Manner”

A group of international observers under the umbrella of the International Conference of the Asian Political Parties (ICAPP) have released a statement on the conduct of their mission to observe the communal election held on Sunday, 5 June 2022, in the Kingdom of Cambodia.

This group of international observers included Hon. Ramin Mamandov, Member of Parliament from Azerbaijan, Member of the Board of New Azerbaijan Party and Co-Chairman of the Youth Wing of ICAPP, Hon. Soltan Marnrnadov , Member of Parliament from New Azerbaijan Party and Mr. Aldwin Requejo, Representative of the Office of Hon. Jose de Venecia, Founding Chairman of the International Conference of the Asian Political Parties, Hon. Ek Nath Dhakal, President of Nepal Family Party, and Mr. Wu Chuanbing, Representative of the Communist Party of China.

During the election observation mission, the delegation paid a courtesy call to Prime Minister Hun Sen and local civil society organizations, with the support and facilitation of the National Election Committee (NEC). The delegation also had the opportunity to discuss and exchange views and learn about the legal and political updates in the country, including how “the NEC has been leading the organization and functioning of the 2022 communal election in a way to ensure that this election would be conducted in accordance with the principle of inclusiveness, transparency, free and fairness.”

The statement continues, “On the election day, the delegation visited polling stations shortly before they were opened so that the delegation could watch NEC staffs’ preparations in order to ensure the voting process is substantive. As a result, the delegation noted that the professionalism and integrity of NEC staff were of high standard and beyond reasonable doubt. Furthermore, to gain the most insights into the voting process, the delegation also carried out its observation activities in a number of polling stations, as such the delegation observed that Cambodian authorities of all levels had substantially created all conducive conditions for all political parties to participate freely and fairly in the election process throughout the country.”

“The delegation noted that the voter turnout rate was well over 77.9 percent of the voter registration list, signifying the active participation of the Cambodian people in its political and democratic process, particularly in upholding the values of human rights, and principles of democracy. However, despite some complaints received by the NEC, the delegation did not see any incidents that may substantively undermine the process or the results of this 2022 communal election.”

“In conclusion, the delegation trustfully believes that the election has been peacefully conducted in a free, fair, transparent and inclusive manner. The delegation observed that this 5 June 2022 communal election has been held in line with universal direct suffrage by secret ballot and in accordance with the principle of multi-party democracy, rule of law and universal human rights as enshrined in the Constitution of Cambodia and international human rights instruments to which Cambodia is a party.”

The statement concludes with the members of the delegation saying they were “grateful for the opportunity to directly observe the ongoing democratic journey of modern-day Cambodia and utterly pleased to congratulate the NEC for its professionalism and the people of Cambodia for their active participation in the election.” The delegation further wishes Cambodia success in strengthening its democracy, human rights, rule of law, peace and development, saying that “the success of the 2022 communal election is yet another significant step in promoting the Kingdom’s ongoing reforms to realize the people’s aspirations for peace, democracy and development.”

“The delegation calls on the international community, all political parties and relevant stakeholders to cooperate constructively with the Cambodian people and with Royal Government of Cambodia to ensure the continuity of the Cambodian peaceful, harmonious society and to contribute further to the development and prosperity of the country, which will help guarantee peace and stability in the region and beyond.” EAC News