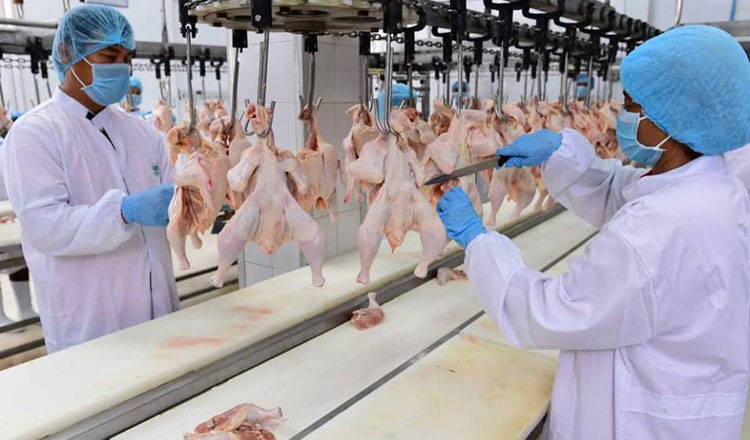 Leading Asia-Pacific agro-industrial and food conglomerate CP Cambodia is investing more than $67 million in animal production, food processing and slaughterhouses in the Kingdom.

This investment aligns with the government’s policy and development plan for the agricultural sector 2019-2023, said Minister of Agriculture, Fisheries and Forestry (MAFF) Veng Sakhon.

Sakhon posted on his official facebook page that CP (Cambodia) is one of the largest companies investing and operating in the sector, processing pigs, chickens and chicken eggs, to produce animal feed and food for humans, including sausages, meat balls and ham.

According to MAFF’s minister, at present the company has two factories, located in Kampong Speu province and Pailin provinces. These two factories are able to produce 55,000 tonnes of a variety of meat up to per month from feed made up of 200,000 tonnes of red corn and 100,000 tonnes of dry cassava per year. The raw materials are sourced locally.

Sakhon added that for other raw materials, the company has requested that the agriculture ministry allow it to import inputs from Thailand to fulfill the factory’s needs. The company has also supplied chickens that can produce 700,000 chicks per week and sufficient pigs to produce 20,000 piglets a week.

“To fulfill the growing need for chicken and meat production, the company has established another slaughterhouse which is able to produce 10,000s chicken per day and 500,000 kilogrammes of ham per month,” Sakhon added.

The company’s production will cover the entire supply chain, from production, to processing and on to market.The company will need 2,700 workers. It will expand animal production by implementing contract farming for pigs and chickens using 1,400 household farmers across the country from this year forward.

“The company plans to increase animal and food production by 15 to 20 percent in order to supply the domestic market, which is increasing year on year.