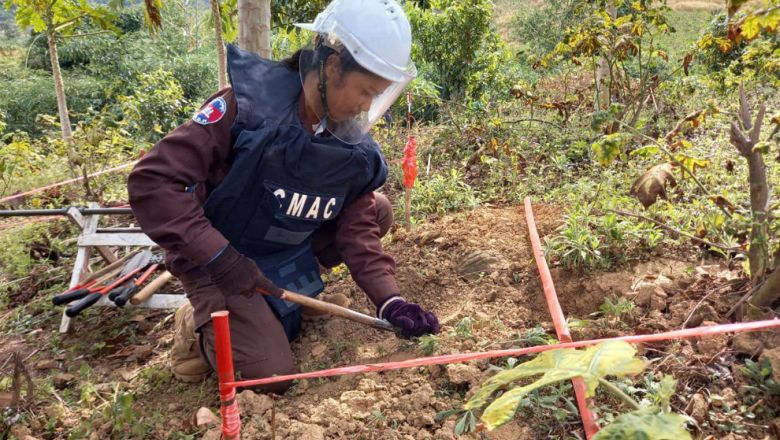 On March 15, the Korea International Cooperation Agency (KOICA) signed an online agreement to provide the first $10 million in grant aid to the Cambodian Mine Action and Victim Assistance Authority (CMAA) in the field of mine clearance in Cambodia through the “Clearing for Results Phase IV project” scheduled to run from 2021-2025.

It was also attended by Nick Beresford, Resident Representative of UNDP Cambodia; Ryan Tierney, First Secretary and Consul at the Australian Embassy; and Elliott Kirton, First Secretary of the New Zealand Embassy in Bangkok, Thailand.

According to a press release, the aid was intended to advance the project in Battambang, Pailin and Banteay Meanchey provinces and it has also gained the budgetary support of the Cambodian government, Australia, New Zealand and UNDP.

Ly Thuch said that the aid would help save people’s lives, reduce mine-related risks and raise the living standards of the Cambodian people by providing them with more safe land. Mine action continues to be at the forefront of efforts to rebuild lives and communities that have become marginalized and rendered vulnerable by conflict.

“This signing ceremony sets an excellent example for cooperation and support, leading the way for Cambodia to reach its 2025 mine-free target,” he said.

Rho Hyun Jun recalled that Cambodia’s landmine contamination was the result of a protracted sequence of internal and regional conflicts that affected the country from the mid-1960s until the end of 1998 and that the north-western regions bordering Thailand had some of the highest concentrations of anti-personnel mines in the world.

“With this [historical] understanding in mind, the Korean government through KOICA has decided to support mine clearance activities in Cambodia by providing US$10 million from 2021 to 2025 through the Clearing for Results-Phase 4: Mine Action for Human Development Project,” he said.

He added that the main objectives of this project were to create pathways for accelerated development in villages that have been deemed mine free with national and international partners, to address challenges in community development, and to reduce poverty among the most vulnerable households.

“This project highlights Korea’s commitment to contribute to Cambodia’s sustainable socio-economic development, in alignment with Cambodia’s Rectangular Strategy and the National Strategic Development Plan,” he continued.

Nick Beresford said that the Republic of Korea’s contribution today signified the firm commitment of the South Korean government to continue the fight against anti-personnel landmines and explosive remnants of war around the world and in Cambodia.

“I would like to express my sincerest thanks to our implementing partners, including the Cambodian Mine Action Centre, National Centre for Peacekeeping Forces, all national and international clearance operators, mine action donors, other stakeholders and those individuals working to support the Clearing for Results project and the mine action sector,” he said.

According to CMAA, in addition to the KOICA, Cambodia has been supported by other international donors in its mine clearance efforts including nations such as the US, Australia, England, Japan, New Zealand, Canada, Germany, Switzerland and Ireland, as well as international bodies like the UNDP and UNICEF along with civil society organisations and generous individuals the world over.

As of 2020, Cambodia has cleared mines from 2,138 sq km of land. These efforts have destroyed over one million anti-personnel mines and more than 25,000 anti-tank mines and explosive remnants of war (ERW) including 2.8 million cluster bombs.