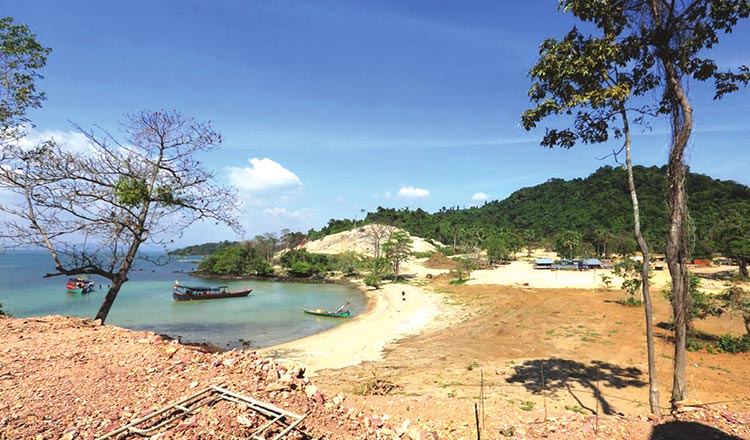 The physical and economic landscape of the coastal areas in Kep province is in the process of transformation, thanks to a number of development projects funded by the Asian Development Bank (ADB) which were chosen following consultations with the Ministry for Public Works and Transport (MPWT), and the Ministry of Tourism (MOT).

It’s part of the Greater Mekong Subregion (GMS) programme that involves the six countries along the Mekong river and is designed to enhance economic cooperation between them while implementing ‘high-priority’ projects that will boost the local economy and improve infrastructure, with the assistance of ADB. It has the added goal of increasing commerce between the GMS countries and the neighbouring Asean nations.

In the case of the four high-priority projects that were green-lit in Kep province, the primary objective was to improve transport infrastructure and environmental services.

One of the developments includes the construction of the Kep Coastal Road that will stretch 12 km towards Kampot town from Kep town.

Locals in the area have had the surprise to find a massive dune laid down as the foundation for the new road, and extending far beyond the previous shoreline as to render the old sailing club eerily landlocked.

While the new coastal road will connect the coastal communities and generate more tourism, the more obvious tourist development is the completed construction of the new pier at Kep town, as well as a completely new pier under construction on Koh Tonsay, the lush green little island lined with coconut trees located 4 km off the coast and known to many as Rabbit Island.

The Governor of Kep Province, Som Piseth, referred to the projects as being part of a new focus of tourism which will be orientated towards eco-tourism and ‘VIP tourism’.

Currently, the only local business on the island, along with coconut plantations, is along the idyllic, popular white sand beach where small ferries drop off visitors who wade a couple of metres to the beach to relax and enjoy perfect swimming conditions, little cabin restaurants along the beach, and the surrounding nature.

The ADB funded pier project on the island under construction would redirect these ferries to a 130-metre pier with a terminal and two floating pontoons. Anthony Gill, Country Director of ADB Cambodia, told Khmer Times that the pier was “designed in close consultation with residents, ferry operators, and other local businesses.”

What is set to change the island radically, however, is what development is to come following the ADB’s pier completion. The Governor of Kep Province, Som Piseth, told Khmer Times, “The government gave Try Pheap Company a grant to develop Koh Tonsay (Rabbit Island) with a 140-hectare area. The company has been developing infrastructure but has not yet undergone major construction.”

Considering the island is only 200 hectares, 70 percent of the almost untouched island will make way for five-star hotels, a residential zone, a commercial zone, casino, bungalow, sport on the beach, public place, transportation – boat, cable car.

Canadian author, Bjorn Turmann, set part of his 2009 novel The Last Tobacco Shop in the World on Rabbit Island. He considers the island’s beach “unlike any other in Southeast Asia” and doesn’t quite see the prospect of a casino on the island as a ‘sustainable use of heritage resource’.

“Come to Rabbit Island and choose where you would rather be: at the blackjack table in a hotel resort or at a rustic beach hut with no running water and limited electricity under the care and attention of a lovely Cambodian family who, like you, wants to keep that part of the island exactly like this,” he said, adding, “I understand that change is the only constant, but some changes will never feel right. Rabbit Island always felt like one of those places.”

For his part, Gill sees the pier construction at least as being built in harmony with the island’s environment, regardless of what ‘VIP’ tourism projects may follow. “All ADB financed investments including the coastal road and Koh Tonsay Pier follow ADB and government environmental safeguards requirements and Cambodia’s environmental laws and regulations. This includes measures to protect Kep’s rich heritage resources,” said Gill. Khmer Times