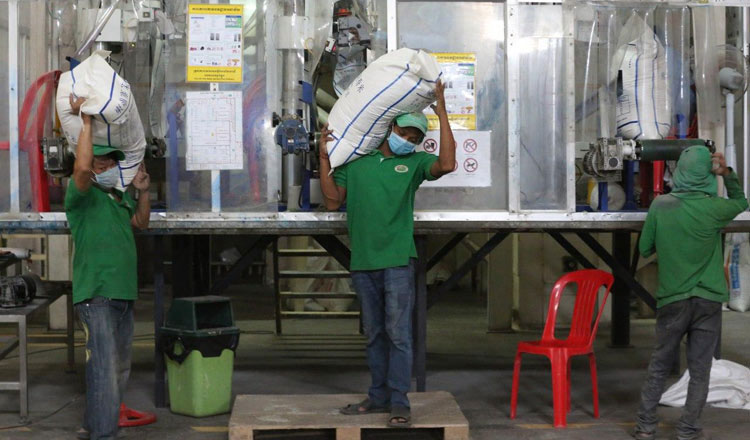 Song Saran President of Cambodia Rice Federation, raised about the potential of Cambodian rice in China’s market. “This potential is a good chance for Cambodia to expand its amount of rice export to China or to request the latter to increase the Cambodian rice import quota, as Cambodia-China friendship is strong as iron,” he said.

Wang said that Cambodia’s produce has advantages in quality and price. “The deepening of bilateral cooperation has made cross-border business much more convenient. Moreover, after learning that the Regional Comprehensive Economic Partnership (RCEP) agreement will soon take effect, two banks have proposed to provide financial support for our new business,” said Wang, adding that the newly harvested Cambodian tapioca chips will soon depart for China.

The company in recent years has constantly added new routes to member countries of the Association of Southeast Asian Nations (ASEAN) thanks to robust China-ASEAN trade, Lu added.

Since the implementation of the China-ASEAN Free Trade Agreement (CAFTA) in 2010, the trade in goods and services between China and ASEAN has grown rapidly through the deep integration of industrial and value chains. Tariffs on 7,000 products have been scrapped under the CAFTA framework.

On Monday, China and ASEAN jointly announced the establishment of a comprehensive strategic partnership — a new milestone in the history of China-ASEAN relations — to contribute further to the building of an open, inclusive and sustainable region that enjoys peace, security, prosperity and sustainable development.

Initiated by the 10 ASEAN countries to establish a unified market by reducing tariffs and non-tariff barriers, the RCEP will take effect on Jan. 1, 2022, and more than 90 percent of merchandise trade in the region will be eventually subject to zero tariffs.

The RCEP includes 10 ASEAN members, China, Japan, the Republic of Korea (ROK), Australia and New Zealand. The 15 states’ total population, gross domestic product and trade all account for about 30 percent of the world total.

Do Nam Trung, consul general of Vietnam in Nanning, said that the signing of RCEP will greatly boost the development of economic globalization, and usher in a new era of economic and trade exchanges between ASEAN and China.

“The China-ASEAN relationship has developed into the most successful and dynamic model of cooperation in the Asia-Pacific region,” said Zhai Kun, professor of the school of international studies at Peking University.

“The upgrading of China-ASEAN bilateral relations will offer more cooperation options for regional and global governance, and to a large extent drive the progress of RCEP,” Zhai added. Xinhua/Khmer Times