Cambodia-South Korea deal ‘to be signed next week’ 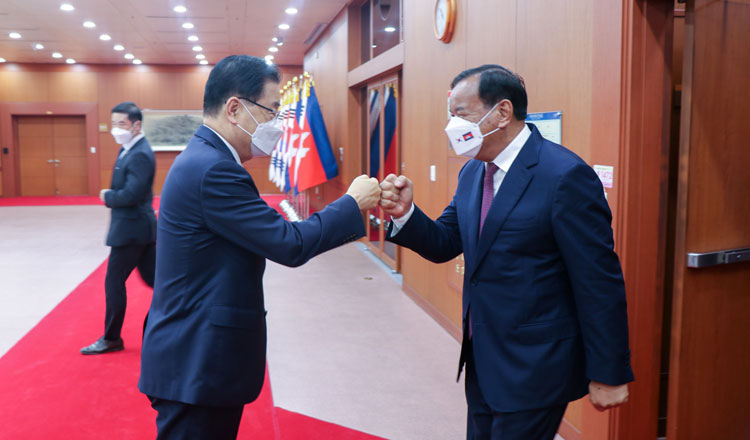 Cambodia-South Korea deal ‘to be signed next week’

The Kingdom of Cambodia and the Republic of Korea will sign a draft free trade agreement (FTA) next week, as the two countries witness their bilateral trade amount on the rise.

The draft pact is scheduled to be signed on Tuesday online by Cambodian Minister of Commerce Pan Sorasak and Korean Minister of Trade Yoo Myung-Hee, the ministry’s spokesman Seang Thay said.

The ministry added the ceremony has been scheduled to be signed physically but, because of strict Covid-19 preventive measures, the pact will be penned in a virtual ceremony. The two countries ended drafting an FTA in February this year. The bilateral FTA with South Korea will open a wider market to Cambodia’s products, the ministry said.

The bilateral trade between Cambodia and South Korea was valued at $720.5 million in the first three quarters of this year, a year-on-year increase of 10.3 percent, according to data from the Korean International Trade Association. From January to September, Cambodia exported $259 million of products to East Asia countries, a 5.2 percent increase compared with the same period last year. Total imports from South Korea were valued at $461.4 million, a year-on-year increase of 13.4 percent. These trade figures made Cambodia’s trade deficit with South Korea $201 million. It will be the second bilateral FTA for Cambodia after the Cambodia-China FTA was endorsed recently. Lim Heng, vice-president of the Cambodia Chamber of Commerce, said the pact will contribute to enhancing the investment sector and boosting exports.