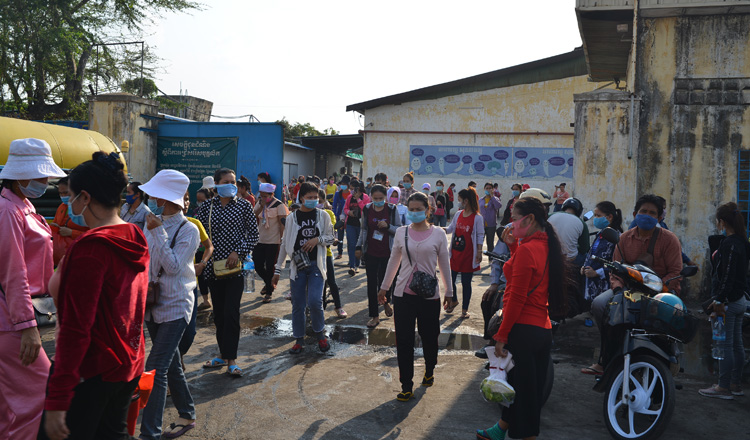 Any change to the minimum wage would affect more than 800,000 workers in the garment and textiles industry, which is Cambodia’s largest employer, contributing more than 0 billion to the economy, says the Garment Manufacturing Association of Cambodia. KT / Pann Rachana

The bank says the prolonged Covid-19 outbreak is responsible for its downward revision.

“However governments around the world have responded favourably, including Cambodia, and we are anticipating renewed growth within the region and in Cambodia. Perhaps not to the extent we had anticipated earlier, as the emergence of new variants remain a key risk to the outlook,” she said.

The ADB says the pandemic slowed the recovery in domestic demand, resulting in lower inflation. It cut its outlook for price rises to 2.9 percent this year, from April’s forecast of 3.1 percent. The ADB says inflation will slow further next year to 2.7 percent, from an earlier forecast of 3 percent. Consumer prices rose 2.9 percent in 2020. The ADB says there were several other factors behind the downward revision to this year’s GDP forecast. “It also reflects lockdowns and temporary factory closures, which have disturbed production in the garment, travel and food sectors during the first half of this year,” said Poullang Doung, senior economics officer at the ADB Cambodia Resident Mission.

“The agricultural sector and light manufacturing performance remain as expected with very robust export growth but construction and real estate remain very subdued,” he said, adding that rising imports of materials suggest a pickup in construction activity over the rest of the year.

A growing trade deficit will widen the current account deficit this year, according to the ADB. It forecast a full year deficit at the equivalent of 15.6 percent of GDP, but it says that will widen significantly if Cambodia continues to import a lot more gold than it exports.

The bank says a successful vaccination campaign will put the economy on track for stronger growth next year. More than two thirds of the country’s 16 million-plus population has received two vaccine doses. Daily Coronavirus infections have been rising since the start of the month but are still a long way off July’s peak.

The ADB highlighted three areas for Cambodia to focus on as the pandemic starts to ease.

“It will remain with us in some form and the appropriate responses for managing that will continue to evolve. Communication is key for that and… we would see a need for further provision of information and efforts to close and respond to the gap in knowledge, understanding and trust,” said David Freedman, country economist at the ADB Cambodia Resident Mission. “As the economy recovers, we may see some divergence among households depending on the source of their livelihood and the region of the country they live in. With that divergence, we need to have a clear and structured transition moving from emergency cash transfers into a longer assistance programme that is appropriate to the need,” he said.

The third focal point is the reopening of schools, Freedman said. “Some young children will have missed out on a significant period of time and, from what we know from the surveys we’re doing with UNICEF and World Food Programme, the level of learning that is taking place at home is quite variable. A significant proportion of children will have had quite limited, little or no access to learning while schools have been closed.”