Recovery to be driven by three principles 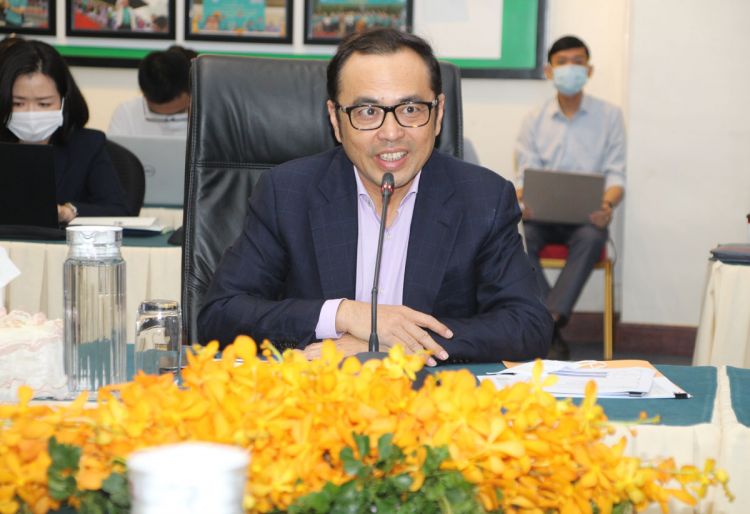 Recovery to be driven by three principles

A senior official at the Ministry of Economy and Finance said the government’s driving principles to restore the economy post-COVID-19 from 2021-2023 will be strategic approaches towards survival, reform and resilience.

During a meeting with the Asian Development Bank, World Bank, International Monetary Fund and the United Nations Development Programme (UNDP) last week, Permanent Secretary of State at the Ministry of Economy and Finance Vongsey Vissoth said while the pandemic has not yet ended, signs of recovery in the global economy have been evident over the last few months.

He did add, though, that the new strains of the virus and the ensuing spike in fear has contributed to continued uncertainty in the global economy. Although COVID-19 vaccines will assist in the global battle against the virus, questions remain on their efficacy, quality and safety.

Vissoth noted that Cambodia, along with other countries in the world, has been affected by the negative impacts of global geopolitics, trade wars and technology. He added that a majority of countries, especially those in the developing world, have used various policy instruments, either fiscal or monetary, and are increasing money supplies by printing additional currency. These instruments are however, approaching exhaustion.

Vissoth said that in this context, countries running out of policy instruments will be unable to respond to the crisis if the pandemic spreads further. He added the rise in people suffering from “virus-fatigue” may cause an increase in high-risk behaviour that could spread the virus further and faster.

“As part of the world, we cannot avoid this disease. However, the head of the Cambodian government has the ability to manage the pandemic situation well in the Kingdom [as goes its] economic well-being and public health,” said Vissoth.

He added that from now through 2023, the government will prioritise strategies focused on economic survival, reform and resilience. He added that the survival strategy is designed to boost economic recovery and enable a continued battle with the virus. Additionally, government strategies will be fashioned to stabilise peoples’ livelihoods, businesses and investment, particularly in vulnerable sectors as well as new sectors that have the potential to create more employment and support domestic consumption. Attention will also be paid to the potential need to react to rising expenses among those affected by the pandemic.

Vissoth said the government will enact reform in order to diversify the various economic sectors as well as to promote competitiveness. There will be a focus on improving the business and investment environment, business and investment facilitation and accelerating digital development in the economic system. “This is a time to turn crisis into opportunity,” he added. He also noted that building sustainable resilience will be significant as the government looks to strengthen institutional capability, develop human resources, fortify the social protection and health system and increase national budget space to ensure resilience in the financial sector.

Nick Beresford, UNDP resident representative, said the government’s recovery plan focuses on survival and revival but is also about strengthening the foundations for growth and resilience. The UN’s own Socioeconomic Response Framework took inspiration from discussions with the government, using that to align UNDP interventions with government priorities. He sees measures being led by the government as helping vulnerable households, supporting recovery of the most affected businesses, stimulating economic activity and reducing unemployment with other positive spillover effects. Together with measures to increase competitiveness, economic diversification and public investment, they would contribute to building back better.

Beresford added that while immediate measures should focus on the most vulnerable and affected sectors, especially the tourism and garment industries, policies to incentivise investment in higher value-added activities, for example, in digital trade and assembly industries, will be strategic in the medium term.

He added last year the UNDP modelled possible effects of COVID-19 on the Kingdom’s economy and that, with no interventions, its static general equilibrium (CGE) model predicted a decrease in gross domestic product (GDP) of 4.1 percent and increases of 4.8 percent in unemployment and 17.6 percent in the poverty rate. The model also considered a scenario with generous stimulus for social protection where the impact on GDP was reduced to a decline of 3.3 percent and unemployment and poverty rates would be limited to 4.4 percent and 14.2 percent drops respectively.

Beresford noted it has observed the stimulus packages of 2020 had a strong focus on social protection and a positive effect on the economy. Therefore, the UNDP will revise its projections for 2020 and generate scenarios for 2021.

In principle, the UNDP is anticipating a reduced impact on the economy, unemployment and poverty than was originally predicted for 2020, notably around the 3.3 percent drop in GDP. In 2021, it now expects positive economic growth and improvement in social indicators.

In general, Beresford noted that he could say there is cautious optimism for 2021 because these expectations depend on how the pandemic evolves in the rest of the world and its impact on Cambodia’s main trade partners, the rollout of vaccines and financial market stability, among other factors.

He added the government’s efforts in controlling the spread of COVID-19 and community transmission has been remarkable and remains vital, but the threats of future outbreaks are still present. The government’s successful and rapid roll out of a cash transfer programme to the poor and vulnerable in Cambodian via the IDPoor system was a first for the country and has been a major achievement in helping to protect the most vulnerable from sliding back into poverty and in stimulating the economy during the pandemic.

To build on these successes, the UNDP is piloting a graduation-based social protection programme with the Ministry of Economy and Finance to better support the government in its recovery efforts and to ensure resilience. Strengthening human resource development and investing in green growth is also seen as offering a faster and more resilient recovery pathway.

Beresford pointed out the pandemic has disproportionately affected women and girls in Cambodia with the garment and tourism sectors, ones dominated in employment by females, having been hit the hardest. Education loss may prove the biggest COVID-19 impact he noted, but its effects will not become visible until later in the future. The UNDP has modelled the impact on education, revealing that prolonged school closures caused by COVID-19 could cause a 3.93 percent decline in Cambodia’s Human Development Index (HDI). This is equivalent to losing four years in HDI progress. Khmer Times