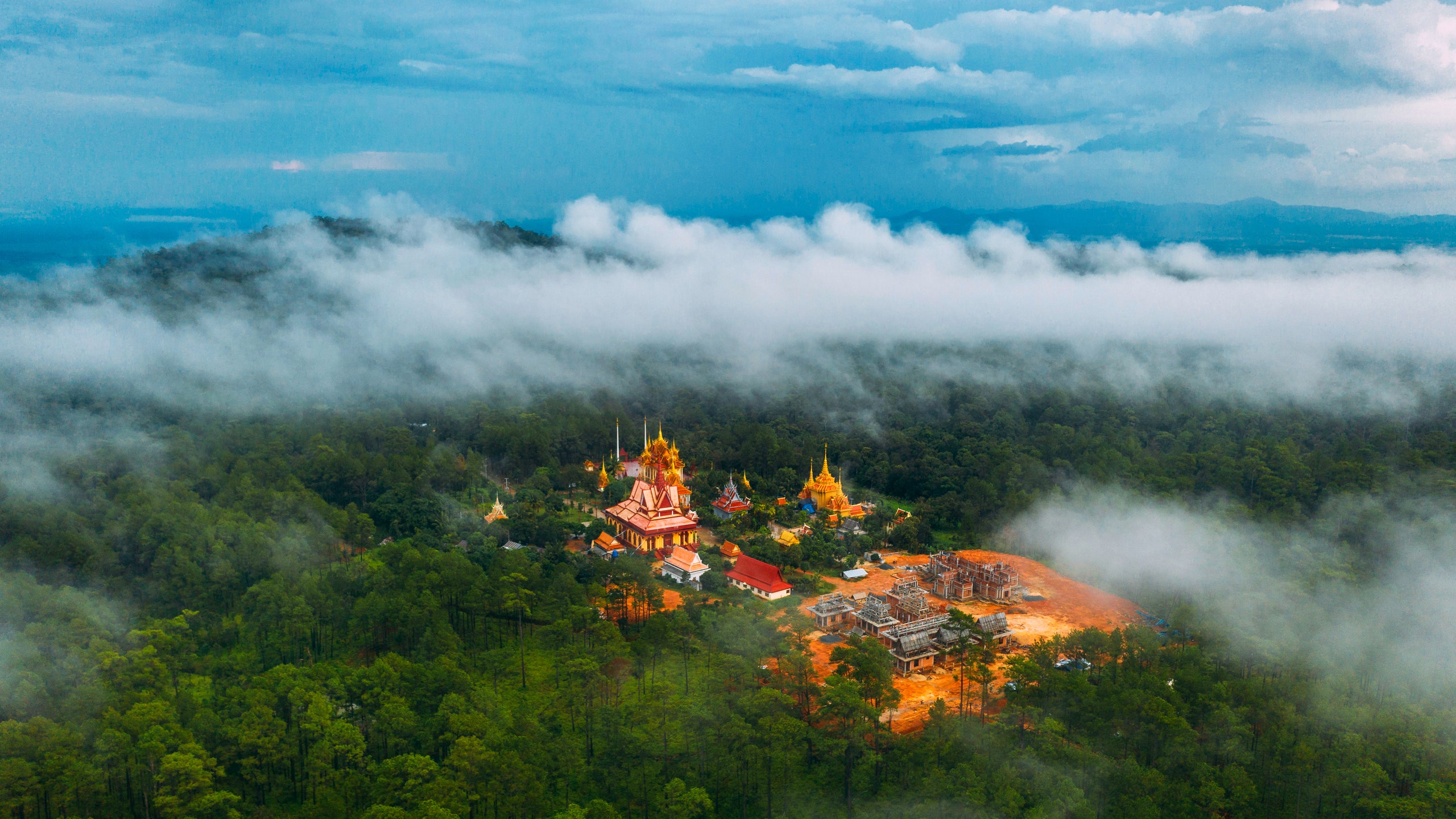 The camera pans from the spires of a temple to the interior, where 75-year-old Master Kong Nay, one of the few surviving virtuosos of the chapei dang veng, a Cambodian two-stringed guitar, strums his instrument. “It’s time to rise as high as the stars,” he sings. “To the male and female artists who seek to fulfill their dreams, go forth and open the new chapter of the treasured arts inherited from me, Kong Nay.”

As his voice carries through the room, the camera shifts to carved Buddha statues and ancient Khmer Empire relics, then rests on VannDa, a 24-year-old Cambodian hip-hop artist seated at the master’s side. “I mix the ancient with the modern seamlessly,” raps VannDa on a beat that blends elements of drill with traditional Cambodian sounds: the whispery notes of a Khmer flute, the thrum of the chapei. As the video continues, we see more young Khmer hip-hop artists bowing respectfully to a titan of the previous generation. VannDa calls out to the audience, “Art is the soul of Cambodia. View those artists as you would the sculptures of our temples.”

This song, “Time to Rise,” is both a symbolic passing of the torch and an unprecedented success for Cambodia’s fledgling contemporary music scene. Within 24 hours of its release on March 28, the video for the song had racked up more than 1 million views on YouTube. Two weeks later it surpassed 20 million—4 million more than Cambodia’s entire population. In the comments section are words of praise from viewers in Thailand, Laos, Indonesia, Malaysia, and all over Southeast Asia. At the time of writing, the song is still going strong at more than 46 million views on YouTube, and gaining momentum on TikTok.

After decades of being absent on the global stage, Cambodian musicians are stepping back into the spotlight, thanks in no small part to Laura Mam, a 35-year-old singer, songwriter, and the founder and CEO of Baramey Production, the independent Phnom Penh-based record label behind VannDa, and other artists including hip-hop duo Kmeng Khmer and jazz vocalist Sophia Kao.

For Mam, this moment has been a lifetime in the making.

Born in San Jose, California, to refugees who fled the Cambodian genocide, she grew up listening to her mother reminisce about the grandeur of Cambodia’s past and the culture that was all but ended by the Khmer Rouge. Now, she is working to build a future for a new generation of Khmer singers, songwriters, and musicians. “When many people see Cambodia, they think of the temples of Angkor Wat or they think of genocide—they don’t think about our music,” Mam says. “This is exactly what I came [to Phnom Penh] to do, because we’re much more than that. It means a lot to shift the narrative.”

In the late 1960s and ‘70s, Phnom Penh was a flourishing musical hotbed, where legendary crooners like Ros Serey Sothea and Yol Aularong belted out love ballads or garage rock songs to adoring crowds. King Norodom Sihanouk and his wife Norodom Monineath were musicians and fervent patrons of the arts. Sinn Sisamouth, who John Pirozzi, director of Don’t Think I’ve Forgotten: Cambodia’s Lost Rock And Roll compared to Frank Sinatra and Elvis Presley, earned considerable acclaim for fusing elements of traditional Khmer vocal stylings with the rhythm and blues coming out of the West.

But after the Khmer Rouge, a Communist regime led by revolutionary-turned-prime minister Pol Pot, seized control of the government in 1975, an estimated 2 million Cambodians were killed—through torture, execution, and at forced labor camps—in a government-led effort. The Khmer Rouge had the goal of annihilating all memory of the culture that came before them, with the regime declaring April 17, 1975 to be “Year Zero,” and set about persecuting the nation’s intellectuals. An estimated 90 percent of Cambodia’s musicians, classical dancers, and artists were killed or disappeared in the subsequent purges.

Even after the fall of the Khmer Rouge in 1979, the once-thriving Cambodian music scene was too decimated to recover. Virtually all of the musicians who survived the purges fled the country and remained in exile. With the currency ruined by hyperinflation, aspiring artists had little hope of earning a living by writing original songs. As a result, during Mam’s childhood, most of the music coming out of Cambodia consisted of pirated songs or karaoke-style covers of Western music.

Organizations like Cambodia Living Arts, which was founded in Cambodia in 1998, have since worked to track down and support the few surviving artists of that lost generation. Yet for all the effort to salvage the history of Cambodia’s musical traditions, until very recently, little attention was paid to creating new ones.

“For the last 20 years, the idea has been to preserve our music—don’t touch it, don’t change it, don’t do anything that might affect its dignity,” says Mam. “We’re scared that we’re being culturally erased off the face of the earth because of the genocide, [so] everything has been about rebuilding. Everyone does their part in this country to love what we used to be.”

For many members of the diaspora who grew up in exile, music was often the only real tie to what the country once was. Like many Cambodian refugees, Mam’s mother, Thida, was eager to put the atrocities she had witnessed behind her when she reached the West Coast in 1980—encouraging her children to speak English and adopt American hobbies like baseball—though her mother kept some elements of her homeland alive through stories, songs, and dance. “When we would get together with the family and the kids were curious about what happened, they would gloss over the atrocities,” Mam says. “So instead, they would talk about the music of the ‘60s. They would talk about how cool and pretty they were as teenagers.”

As teens, Mam’s mother and her sisters would giggle and talk about doing the Twist, a dance that was downright scandalous for their conservative elders and Catholic school teachers. When they could sneak away from their parents, the girls would go to a friend’s house, hike up their school uniform skirts, and dance with abandon to songs by Pan Ron, a Cambodian rockstar known for her innuendo-tinged lyrics. Mam loved the idea of her aunts’ rebellious antics so much that she would later recreate the scene for a music video covering the singer’s hit Sva Rom Monkiss.

“It was always a conversation about how music was a party and those were happy times,” Mam says. “Those are the memories they hang onto deeply, [so] I realized early on that music is a healing tool. Whether you’re young or old and speak the language or not, it brings people together.”

Though Mam never envisioned becoming a musician, she wrote her own music through her time at UC Berkeley, until one day, on a whim, she asked her mother if they might write a song in Khmer together. Thida came up with a poem comparing love to a blossoming flower—a stylistic technique in line with the epic Khmer love ballads of the ‘60s. When Mam set Pka Proheam Rik Popreay to acoustic chords and uploaded it to YouTube, the song reached more than 75,000 views by the next morning.

“I started getting messages from Cambodians in Germany and Korea and everywhere saying, ‘Thank you for making an original song,’” Mam says.

Mam kept publishing original Khmer songs online, and more people began to notice. After she posted the video for Sva Rom Monkiss in 2014, Jonathan Lee, a professor of Southeast Asian and Sino-Southeast Asian American studies at San Francisco State University asked her to speak to his class. At the end of her lecture, the professor revealed that he had an ulterior motive in inviting her: Lee had grown up knowing next to nothing about his family history. When his father had listened to Mam’s song, he broke down in tears. He confessed to his son that he had fled the Khmer Rouge and that, prior to the genocide, he too had been a musician in Cambodia.

“He said, ‘I had never been able to have this conversation with my father and this opened up a place for him,’” Mam says. “For people who have been through trauma, music is a safe place to open up dialogue. I walked away realizing that something was calling my name and I had to follow. It was one of the most powerful moments of my life.”

In late 2014, Mam packed her bags and moved to Phnom Penh with her mother’s blessing. Since most of the existing record companies viewed anything other than covers as commercially risky, Mam bypassed them, opting instead to handle all of her own contracts and negotiations. Her first album, In Search of Heroes, was such a success, it paved the way for other independent Cambodian artists making original music.

While Mam continues to make music of her own—her most recent single, a collaboration with VannDa called Just Like You, dropped in March—her vision these days is far more ambitious. Most of her energy is focused on building a platform for young Khmer artists through Baramey Production. Sinn Sisamouth and other giants of Cambodia’s musical past were unafraid to innovate, to incorporate elements of psychedelic rock or jazz into Khmer music and create something wholly new.

Mam believes that this generation can do the same—and the time to do so is now. “We are ready for the world to see us, to get to know our story,” Mam says. “It’s a moment of claiming a new cultural identity. We’ve always been quietly in the background, but I believe that music is changing that.” Conde’ Nas Traveler