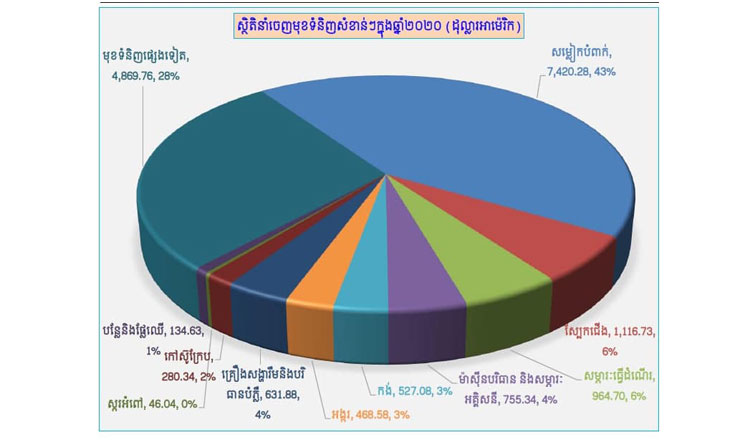 Despite the global economic fallout from the COVID-19 pandemic, the Kingdom’s total trade volume remains positive, reaching $35.8 billion last year, a rise of 2.5 percent compared with the year before, according to the annual report from the Ministry of Commerce (MoC).

Minister of Commerce Pan Sorasak said in the report that trade development is a government priority especially in the context of the market economy because it plays a key role in boosting growth and socio-economic development.

He added the Ministry of Commerce has been putting much effort into trade development in the region and internationally as well as promoting production capability and sustainable supply chains in the market as part of a wide-ranging economic transformation.

Sorasak added the ministry has also promoted the efficient delivery of commerce services, enhanced intellectual property rights, strengthened consumer protection and competition as well as maintained the safety and quality of products to ensure people’s well-being.

“Despite the fact that the country is facing the spread of COVID-19 and is stuck on some market export destinations, Cambodian exports and imports performed significantly well in 2020,” said Sorasak.

According to the MoC’s figure, the main markets for Cambodian products are the US, the European Union, Japan, Thailand, China, the United Kingdom and Vietnam.

This week, a World Bank report forecast the economy is projected to recover and grow modestly, expanding at 4 percent this year, after contracting by 3.1 percent in 2020. The World Bank added that agriculture will grow by 1.1 percent, industry by 6.7 percent and services by 2.6 percent in 2021. However in 2022, the World Bank forecast that real gross domestic product growth of Cambodia will reach 5.2 percent, contributed to by an improvement in agriculture of 1 percent, of industry by 7.4 percent and services growth of 4.8 percent.

The World Bank said the authorities are taking steps to attract further investment and promote trade by planning to introduce a new investment law in the second half of 2021, boosted by the recently signed Cambodia-China free trade agreement and the Regional Comprehensive Economic Partnership. Under Cambodia’s economic recovery plan, efforts are under way to boost competitiveness through investment climate reforms and the leveraging of digital technologies. Khmer Times