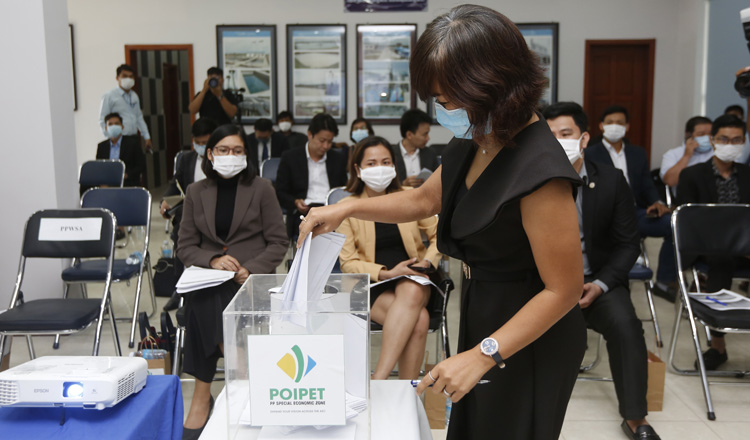 One of the shareholders of PPSP casting a vote on the approved no-dividend distribution and a share buyback in October, 2020. KT/Siv Channa.

CSX Chief Operations Officer Ha Jong Weon said on Tuesday that the decreasing share prices of PPSP over the last few weeks were the result of some investors aggressively selling their PPSP holdings. He noted prior to market close on Tuesday that there no longer appeared to be any signs of a strong “sell” desire among investors towards PPSP shares.

He added: “Currently, investors have come to feel confident about the [share price] increase of PPSP because of [what was] a very low price compared to the [company’s] book value and [its] previous stable price of around KHR 2,300.”

In response to questions that had been asked as to why the share price of PPSP had risen so significantly early this week, Phnom Penh SEZ Plc Chief Financial Officer Fong Nee Wai said: “Our company shares [are a] very much undervalued stock. The net tangible assets per share [are] way higher than our current share price in the market, hence our share price is certainly undervalued. Our company has very good fundamental[s]. As long as good investors have followed this in the market, they will know this is the good time to buy in our stock,” he added.

“I believe [there] are investors in the market [who] surely could read and know about this fact, hence this is a good time to buy-in and [hold PPSP] shares,” Fong added.

During the extraordinary general shareholder meeting last October, PPSP shareholders confirmed there would be no dividend distribution in 2020 and also approved a share buyback. That was set for mid-December 2020, but has been delayed pending approval by the Securities and Exchange Commission of Cambodia (SECC).

“[Regarding] the share buyback and our shares actively trading in the market recently, we are not involved in any share trading presently to buy our shares in the market via [the] CSX [and will not be] until we have officially obtained approval from the Securities and Exchange Commission of Cambodia,” said Fong.

“If we purchased our shares now, we [would be] subject to [a penalty imposed] by the SECC as we [would be acting] against the listing rules. Not until we have obtained officially the approval from the SECC [will we] buy back our shares from the market,” he added.

“Now we are scheduling [a] meeting with the SECC’s Director-General. [We were] supposed to meet [on] Tuesday this week but, due to their busy meeting schedules, we [are] still waiting [for] their formal response to confirm the meeting request. If we could meet them within [a] few days then we could see whether our request is [going to be] approved by the SECC [soon],” Fong added.

“Please be assured that, as soon as we have received confirmation from [the] SECC, we will inform you of the outcome and our action on [the] share buyback [as officially approved and guided by the SECC],” he added.

Wong Pang Nam, Deputy Chief Financial Officer of PPSP, explained PPSP’s share price being up this week (prior to yesterday), by sharing that there has been increased buying interest in the stock. He said the stock market is driven by sentiment and herd instincts.

“Once market participants feel that share prices are cheap and [investors] are buying, interest for a particular [stock rises and] all will follow,” he added.

“The market is aware of the company’s intention [for a] share buyback and possibly [it] is anticipating that the share price will go higher. But, having said that, the company’s intention was already made known last year during our EGM [extraordinary general meeting] and yet our share price [kept] going down because of continued selling by certain shareholders,” he added.

Wong added that there [are] no logical answers as to why shares go up and down. He did note that shares go up because there are more buyers than sellers and shares go down because there are more sellers than buyers. He stated that the fundamentals of the company [are] also important if one wants to try to explain [further] but, in his experience, he noted it is impossible to know what the stock market will do, adding that the beauty of the stock market is its being very unpredictable.

He also mentioned that PPSP shares reaching an all-time low, triggered investors to perceive upside value in the shares and start buying, which prompted others to follow, echoing his “herd mentality” theory again as to why investors reversed course.