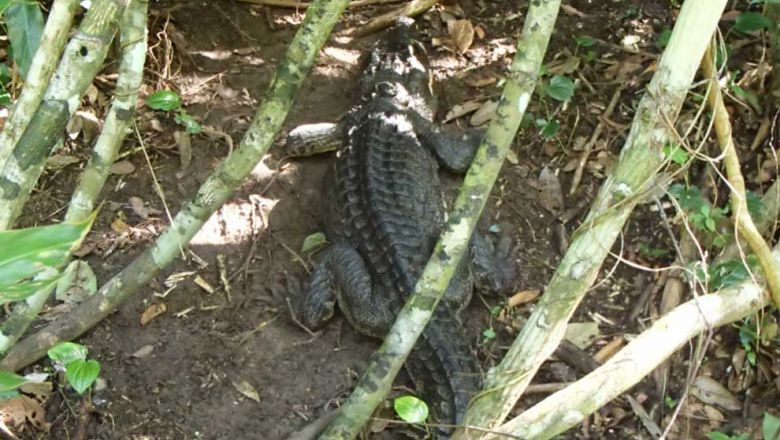 Wildlife organisation Fauna & Flora International (FFI) and the Cambodian Forestry Administration recently re-discovered a female Siamese crocodile in the Cardamom Mountains after a community group found her nesting after she laid more than 10 eggs.

The FFI said on its website on Tuesday that the endangered crocodile was first rescued in 2017 and was kept at the Phnom Tamao Wildlife Rescue Centre until 2018.

Then, the FFI and the Forestry Administration released the crocodile into the Cardamom Mountains.

According to FFI, a radio transmitter was affixed to the crocodile to track her. Data showed that she stayed close to the release site until late 2018 when she travelled downstream. She appeared on the radar again in the spring (March, April and May) of last year, before disappearing again.

She wasn’t seen again until a community group in the mountains found her nesting in June.

In a news release, FFI said the eggs were unfertilised and could not hatch. The organisation attributed this to the lack of crocodiles in the area and the likelihood that male and females rarely meet in the wild.

Males had been released close to the same location in the past, but they likely moved away, it said.

The director of the Office of Research, Education, Outreach and International Cooperation of the Phnom Tamao Zoological Park and Wildlife Rescue Centre (PTWRC) and member of the Cambodian Crocodile Conservation Project, Sam Han, said on Tuesday that “the crocodile seems to be slightly thin as it takes time and effort to protect its nest and eggs.

“But it is a normal healthy crocodile that can move quickly from one location to another when it sees a human or an enemy.”

He said the female crocodile, like all others living in the wild in the Cardamom Mountains, have been protected by the Forestry Administration, the FFI and local communities since 2000.

“We have a patrol group consisting of 31 people to protect crocodiles. They patrol weekly to trace them and protect them from threats in crocodile sanctuaries.

“Officials observe crocodiles yearly through radio transmitters attached to them before they are released to their natural habitats,” Han said.

To safeguard this species of crocodile, the Forestry Administration is working with FFI to protect their shelters. A breeding programme to help boost the species’ population has also been established at the Phnom Tamao Zoological Park and Wildlife Rescue Centre, he said.

Siamese crocodiles are critically endangered animals which only exist in Southeast Asia. There are estimated to be fewer than 500 of them in the world, with many living in Cambodia.