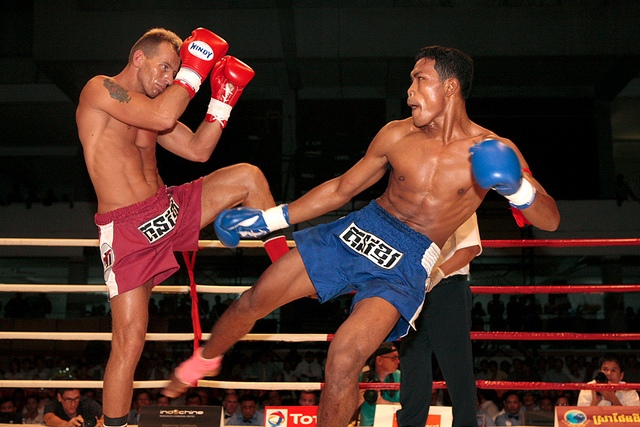 A well-known promoter of Kun Khmer bouts inside Cambodia and outside said this year will be crucial for the development of the sport.

Matias Andres, co-founder, and leader of The Riel Team said that despite its popularity, Kun Khmer still needs more support. The Riel Team is a Cambodia-based fight promotion and management team.

Also known as Pradal Serey, Kun Khmer is a Cambodian combat sport where fighters try to beat their opponents by way of punches, kicks, elbows and knee strikes. Fighters can win either via a knockout (KO), technical knockout (TKO) or by match points. The sport is similar to kickboxing.

“Kun Khmer is in a delicate spot because even if it is widely popular in Cambodia, there is a need for more financial support and teamwork between promoters, organizers, and fighters,” Andres stressed.

“The sport has seen a rise and I think 2020 will be crucial for the development,” he added.

The Riel Team, according to Andres, chooses to take the road less traveled by putting Kun Khmer and Cambodia in an international context, instead of focusing wholeheartedly on the local scene.

A week ago, The Riel Team and Oriental Wrestling Entertainment (OWE) of China organized together Kun Khmer bouts in Siem Reap that featured local and international fighters.

The event, which was held at the Angkor Warrior Arena on Pub Street, featured six bouts in all.

“The event offered a unique mix between the Cambodian martial art of Kun Khmer and top-level wrestling. The most highlighted bouts were the international fights arranged by The Riel Team, where two young up-and-coming fighters stepped into the ring to test themselves in the art of Kun Khmer,” Andres pointed out.

Skeels Ryan Kim, a Cambodian-US fighter based in Phnom Penh, made his second walk to the ring and won another victory by TKO over Rithi Khvanneak of Cambodia in the 57 kilograms (KG) division.

Roland Gloeker, a 16-year-old German, took on Rak Vichhai, a Kun Khmer veteran more than twice his age with a lifetime of experience. He won by KO via elbows to the head in the 75kg bout.

“Even though most of the fighters are not well-known to the public, they put on a great show and showed why Kun Khmer is a force to be reckoned with, not only in Cambodia but even on the international stage,” he stressed.

Andres said they want to share Kun Khmer with the world by having foreigners fighting in Khmer martial arts.

Andres said similar competitions are in the works as they continue efforts to help develop the sport and make it more well-known outside the Kingdom. “The Riel Team will continue to work together with the good people behind OWE,” he said.

During the Siem Reap event, according to him, they were able to discuss with OWE plans to hold another major Kun Khmer event soon: Kun Khmer ULTRA.

“We are planning to hold our very first Kun Khmer ULTRA event in the first half of 2020 and we are happy that OWE is as excited as us. Kun Khmer ULTRA is Kun Khmer with MMA gloves and higher-paced action,” he pointed out.

“Fighting with smaller gloves will allow Cambodian fighters to have a local platform to prepare them for the bigger stages of the world. International organizations such as ONE Championship and WLC (World Lethwei Championship [touted as the biggest near-bare-knuckle fighting in the world] are all fought with smaller gloves. We just want to make sure Cambodia doesn’t fall behind,” he added.

Early this month, The Riel Team also organized a kickboxing bout between Rumchong and Japanese kickboxer Kazuki Yamagiwa in Tokyo. Rumchong won the 67kg bout by a points decision.