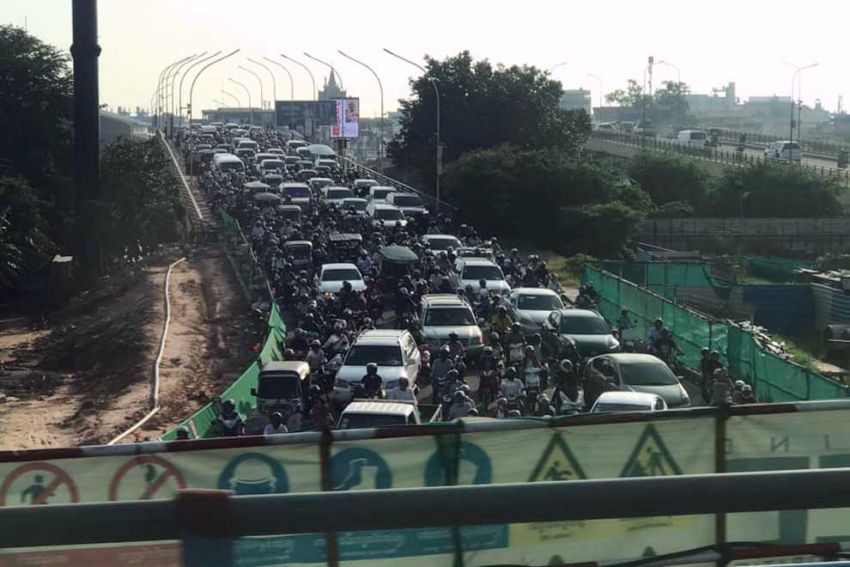 The Phnom Penh municipal administration has formed a working group to assess a bridge construction project across the Tonle Bassac River in a bid to improve traffic flow at the capital’s Chbar Ampov district.

Deputy municipal governor Suy Serith will lead a working group of 17 members, with governors of both districts acting as deputy chiefs.

To facilitate the bridge’s construction, Sreng tasked the group to collect data on the affected families and identify possible relocation areas for them.

After data gathering, a report will be submitted to inform Sreng of the evaluation results and suggestions from the team.

Phnom Penh Municipal Hall spokesman Met Meas Pheakdey said on Wednesday that the group had already begun its work and that the project’s estimated cost will be released once the assessment is completed.

“Those areas [Chbar Ampov and Meanchey districts] are very busy so the municipal hall is trying to find solutions to ease the traffic congestion. The bridge will contribute to that. It will also help businesses to flourish and, in turn, improve the economy,” he said.

When they encounter challenges in the project that could not be easily dealt with, they would ask for the intervention of Sreng, said Monyra.

“In general, traffic along National Road 1 is busy so we need to find solutions urgently because a great number of people are moving into the capital.

“Even though we already have the Prek Samrong Bridge, it still hasn’t helped a lot with easing traffic congestion, so the municipal governor [Sreng] decided to build one more bridge,” said Monyra.

Affiliated Network for Social Accountability executive director San Chey said bridge constructions responded to the demands of the city. Hence, he called on the relevant authorities to participate in the assessment so results would be accepted by all affected parties.

“We want to see the relevant parties engaging in the study because we want an acceptable bid with transparency and fairness.

“The bidding process should be highly regulated to ensure taxpayers are getting the best possible deal without any elements of corruption,” he said, adding that when there are a lot of bidders, construction prices are lower.

“We want a good bridge built with the savings of the state budget,” said Chey.

Phnom Penh Department of Public Works and Transport director Saing Piseth could not be reached for comment by press time.