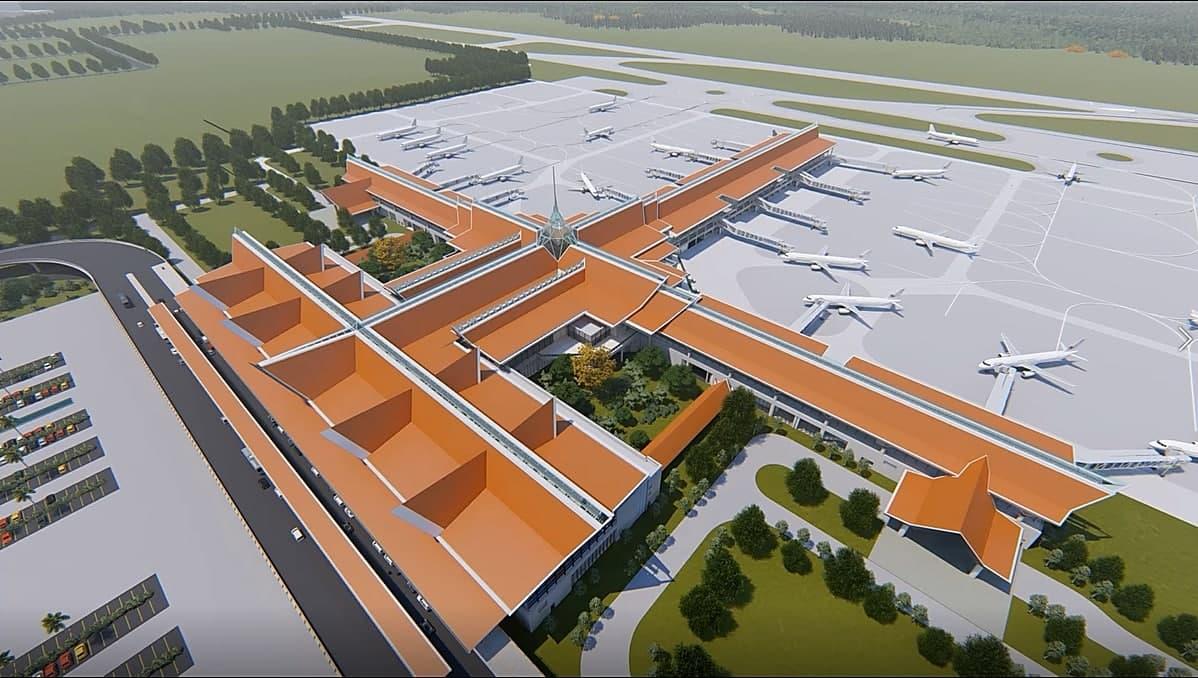 The prime minister made the remarks during a visit to the construction site of the airport in Sotr Nikum district, about 40 km from the UNESCO listed Angkor Archaeological Park and 50 km from Siem Reap provincial town.

“We’re lucky to have a good friend like China and this project is another fruit of cooperation between Cambodia and China,” Hun Sen said.

“This large scale international airport will bring a boost to the economic development in our northern region, including the provinces of Siem Reap, Oddar Meanchey, Kampong Thom and Preah Vihear,” he said.

Hun Sen explained that the construction of the new airport is to respond to the expected growth of foreign tourists to the Angkor Archaeological Park in the post-COVID-19 pandemic era and that it will be capable of accommodating 7 million passengers a year in the first phase.

Covering a parcel of 700 hectares, the new airport is licensed and being invested by Angkor International Airport Investment (Cambodia) Co., Ltd., an affiliate of China’s Yunnan Investment Holdings Ltd.

He said the airport is being developed under the 55-year build-operate-transfer (BOT) model in which five years for the construction and 50 years for business operations.

Work on the project began in March 2020, generating some 1,900 jobs. Hun Sen praised the company for making progress in the project despite the impact of COVID-19.

Tekreth Samrach, secretary of state at the Council of Ministers and chairman of the Steering Committee for the Construction of the Siem Reap Angkor International Airport, said that so far, the construction of passenger terminals has achieved 19 percent and a runway is scheduled to be completed in May.

He said the construction of other infrastructures such as office buildings and dormitories, air traffic control tower, cargo warehouse, oil station and pipelines, and car park are slated to be finished by the end of 2022.

Samrach said the project is expected to be fully completed in March 2023 and put into use in October 2023 after a six-month period for applying for safety and security certificates and testing the entire airport system.

“The Siem Reap Angkor International Airport is the 4E-level international airport with a 3,600-meter runway that can accommodate the landing of all kinds of aircraft,” he said. “It’s another new achievement that will not only importantly contribute to the development of Cambodia’s economy, but also directly benefit people living around the area.”

Yim Yoeun, a 35-year-old concrete worker at the Siem Reap Angkor International Airport project, said he is really happy to work for this mega-project that will provide great benefits for the development of Cambodia’s economy, trade and tourism.

“Here, I have not only received a decent salary of 450 U.S. dollars per month, but also had a chance to learn skills from Chinese counterparts,” he told Xinhua. “Both Cambodian and Chinese workers cooperate well with each other and always give mutual help.”

Another 33-year-old worker Nol Neth believed that local residents will benefit a lot from this airport project, as it will create a plenty of job opportunities for their children.

“Thank you, China, for investing in this huge project that has provided a lot of jobs for us during the construction,” he told Xinhua.

Angkor Archaeological Park, inscribed on the World Heritage List of the United Nations Educational, Scientific and Cultural Organization (UNESCO) in 1992, is the kingdom’s most popular tourist destination.

Prior to the pandemic, the ancient park attracted up to 2.2 million international tourists in 2019, earning a gross revenue of $99 million from ticket sales. Khmer Times