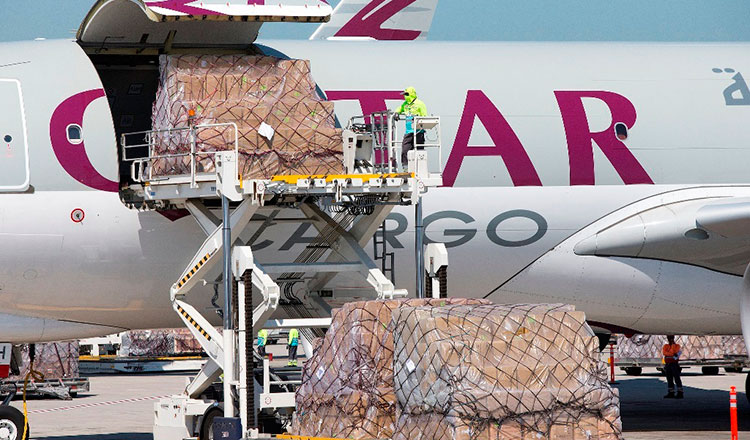 One of the freight airlifters touched down at Phnom Penh International Airport on Friday afternoon was K-Mile Air flight 8K802 from Bangkok, Thailand. The aircraft carried garments and general goods.

“Cargo activities have been crucial amid this challenging time, actually for the last 20 months or so since the COVID-19 pandemic emerged,” he told Xinhua. “Our airport teams are very proud to be part of the national effort to fight against the COVID-19 pandemic by handling the deliveries of vaccines and also by taking care of inbound and outbound essential goods.”

The airport reported a 29.5 percent surge in cargo volume and a 98 percent decrease in passengers during the Jan.-Nov. 2021 compared to the same period in 2020.

“Because the RCEP free trade agreement simplifies process and lowers customs fees, we are pleased to see this agreement entering into force and feel confident that this will also contribute to increasing air cargo,” he said.

The deal will eliminate as much as 90 percent of the tariffs on goods traded among its signatories over the next 20 years.

Song Saran, president of the Cambodia Rice Federation, said RCEP will ease trade in goods in the region and all participating countries will benefit to varying extents from it.

“This is the world’s largest free trade area. For me, there’s no doubt that it will be a driving force for global and regional economic growth in the post-pandemic era,” he told Xinhua.

“The agreement provides a greater market access for Cambodia’s products, and I think it will attract more foreign investors to invest in various sectors, including in the rice industry, in order to export finished products to those RCEP countries, with tariff concessions,” he said.

He said when major investors come to Cambodia, they will bring along new capital and sophisticated technologies, which are key for the development of Cambodia’s economy.

Saran, who is also chief executive officer of Amru Rice (Cambodia) Co., Ltd., said currently, his company exports milled rice to China, Singapore and Australia. Under the RCEP, he hopes to expand his business to other countries in the future.

Covering a region with a combined GDP of 26.2 trillion U.S. dollars, or about 30 percent of global GDP, RCEP agreement is an unprecedented, modern, comprehensive, high-quality and reciprocal mega-regional trading arrangement that accommodates the broadest possible interests, conditions and priorities of different countries.

Cambodian Ministry of Commerce’s undersecretary of state and spokesman Penn Sovicheat said RCEP will facilitate trade and diversify the exports of Cambodian products, especially agricultural ones, to the RCEP participating countries.

“RCEP is considered as a victory of multilateralism and free trade and it will become the core foundation for trade and investment in the region,” he told Xinhua.