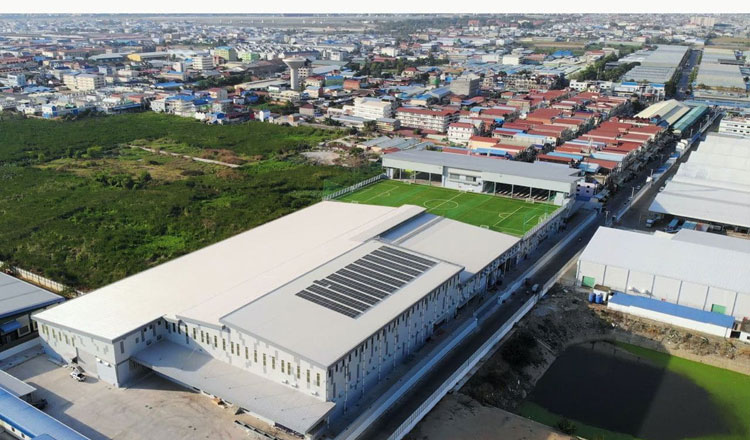 The XO TEX Industrial Co Ltd factory in Phnom Penh is the first to be gold certified under LEED V4 standards. The facility also boasts a regulation-size football pitch on its roof which will host the XO United FC club.

The construction of Cambodia’s first gold-certified Leadership in Energy and Environmental Design (LEED) V4 garment factory signals that the Kingdom’s manufacturing sector is poised to capitalise on the sale of carbon credits through the Climate Impact Exchange (CIX) to be launched later this year.

Its parent company, Hong Kong-based Luenthai Holdings Ltd, one of the largest apparel manufacturers in the world, produces goods for Adidas, Gap and Polo Ralph Lauren among others, according to its public relation company’s website.

Sagaiyaraj, whose consultancy and engineering firm worked closely from the beginning of the project to define sustainability goals, noted that LEED Gold and Platinum-certified buildings can also issue green bonds to finance projects.

“Green buildings and ‘Net Zero Carbon’ buildings will play a large part in this journey to net-zero carbon by 2050. With the new CIX coming online, these carbon savings can be converted into carbon credits and traded on the exchange,” he added.

The exchange aims to become a single global market where firms can come to trade carbon credits and thereby offset carbon emissions. It is estimated that the industry will be worth about $100 billion by 2030.

The Biden administration earlier this month pegged the social cost of carbon at $51 per ton, $1 more than under the Obama administration.

The 1,151 tons in CO2 emissions saved annually from the new XO Tex Industrial factory would be worth $58,701 under the US benchmark but could be even more valuable once the CIX begins trading.

The Walt Disney Company in 2016 made the largest carbon credit purchase in Cambodian history by investing $2.6 million to protect 165 hectares of land in the Keo Seima Wildlife Sanctuary. Khmer Times