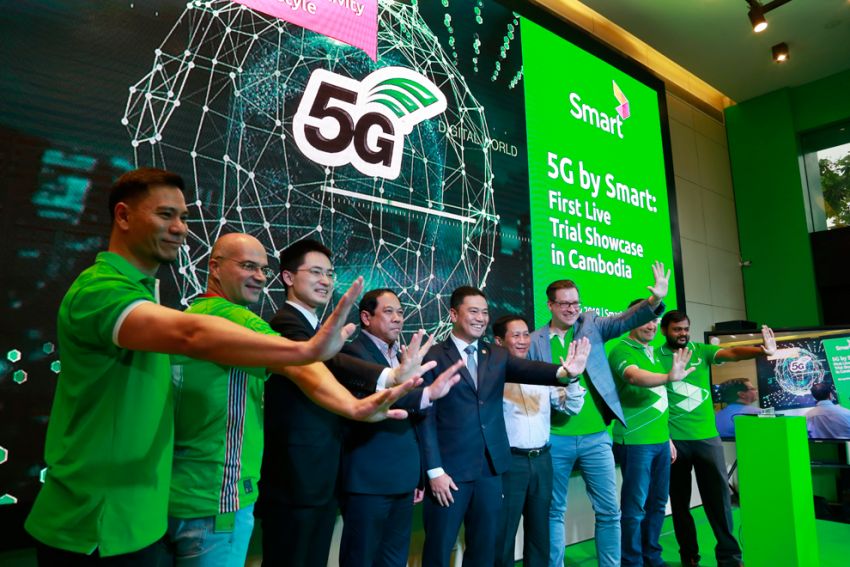 In Cambodia, 5G has yet to take off as mobile operators wait for regulatory clearance and access to the spectrum of radio waves needed to roll out the network.

Smart Axiata chief executive officer Thomas Hundt told Khmer Times that “there is high urgency for the government to expedite the formulation of a holistic 5G framework that is supportive in providing the right incentives to mobile operators.”

A representative of the Ministry of Post and Telecommunications said the government is still working on establishing a 5G roadmap and studying different frequencies to be used. He added that the government is playing close attention to 5G rollouts in the region.

“Cambodia, just like other countries, is studying and investigating implementations of 5G technology in other parts of the world, [to see] how effective and successful it is before we launch 5G technology in the future,” he said.

According to Thinking Machines, a data technology consultancy based in Thailand, the country had over 300 locations across 77 provinces with 5G commercial availability as of February.

Singapore and the Philippines both offer 5G service in select areas and Vietnam is expected to rollout 5G this year.

“Thailand and Vietnam have identified 5G as a competitive advantage for their respective economies and have already started releasing primary spectrum bands, including 700MHz, 3.5GHz and mmWave [millimetre waves], to their licensees with regulations in place to incentivise substantial and fast investments into the network rollouts,” Hundt said.

Smart completed its 5G trial last year and Hundt expects the company will be able to roll out 5G commercial service in Cambodia within six months of receiving approval and spectrum access.

He added that regulations governing the technology should be created with consultations from all stakeholders and incentivise investment in the sector.

“Specifically, for the telecommunications sector, the regulations should facilitate sustainability of infrastructure investment through a balanced taxation approach as well as incentivising and stimulating long-term serious market play through rational market structures and fair competition,” he said.

Hundt also suggested classifying telecom infrastructure and services as essential public services to allow for the uninterrupted construction of necessary infrastructure in the future.

As an example, he said regulations would need to be in place to permit companies to install base stations in industrial zones, boreys and high-rise buildings.

Initially, Hundt said 5G will be able to utilise much of the same infrastructure used for the 4G network, but 5G radio units will be need to be installed on old towers, representing a sizable investment.

He said he expects each mobile operator to need to invest $300 million each over 5 years into 5G technology.

Concerning electricity prices, he advocated for telecom operators to be categorised as industrial electricity consumers – the same as factories – to be able to offer affordable prices to consumers.

While the ministry representative did not give a specific time frame, he said a 5G roadmap and the release of frequencies to telecom operators would hopefully occur at the end of this year or the beginning of 2022.

He added the government is considering how to best attract investment to support the rollout of 5G.

According to the Global System for Mobile Communications: “5G needs spectrum across low, mid and high spectrum bands to deliver widespread coverage and support a wide range of use cases.”

Using the high-band waves, massive advances across sectors are expected to be realised, including fully automated cars which can digitally interact with other cars and the road infrastructure around them, advanced health care in hospitals driven by artificial intelligence and increased connectivity and smart factories which could automate much of the manufacturing and shipping processes.

Hundt said in Cambodia, the initial benefit would be reaped by average mobile customers as currently overcrowded 4G network would be opened up by those who switch to 5G.

“An average mobile data user in Cambodia consumes not less than 20GB of data per month which has loaded the 4G network to a level where the operators can’t fully satisfy the expectations from the users in terms of speed anymore,” he said.

Rollout of 5G would start in city centres such as Phnom Penh, Siem Reap and Sihanoukville first, before being expanded to more rural areas, he said. Khmer Times