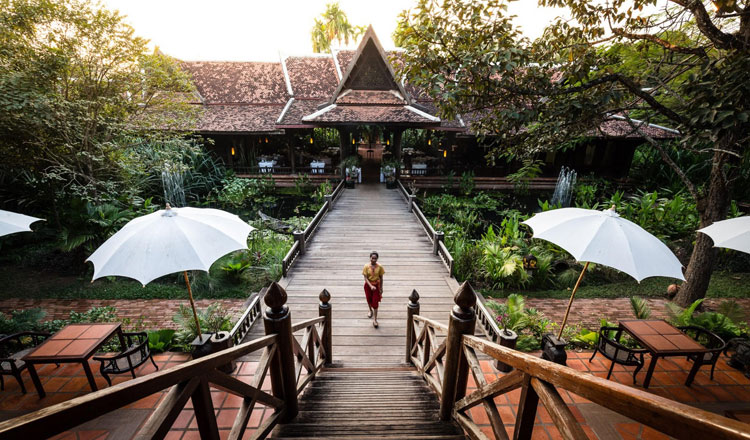 Cambodia Hotel Association’s Siem Reap president David-Jaya Piot has learned just how cruel the Covid curse can be – on February 19 he launched, on behalf of the association, a video designed to boost domestic tourism in Siem Reap.

“But unfortunately, the video was released one day prior to the February 20 community transmission incident,” David says, “So, although the video and hashtag did gain a little bit of traction, it quickly became old news as domestic travel quickly dried up.”

“We closed down the Angkor Village properties, keeping Kulen Elephant Forest open, at the start of Covid,” he says. “We, like many other hotels, are working with a skeleton crew of multi-tasking employees in order to maintain the properties.”

The Siem Reap chapter of the Cambodia Hotel Association has also taken a hit.

“Pre-Covid, the Siem Reap chapter counted 38 companies, today it counts only 26,” David says. “As the crisis drags on, and as Siem Reap remains without stable sources of tourism, the situation is still worsening daily as reserves empty.”

While David’s family were some of Siem Reap’s first hoteliers, opening the Angkor Village Hotel in 1994, David at first chose a different path, looking for a career in international finance outside of Cambodia.

After attending boarding school in Switzerland, he studied economics and finance at the private Bentley University in Massachusetts, worked for three months as a finance intern in Jordan, then returned home to Siem Reap for a one-year visit – and stayed.

“In 2017, after completing my degree in the US, I came back for what was supposed to be only a year working in the family business before completing a Master’s degree in London, then most likely find a job in the field,” he says.

“At the time I did not think Cambodia was where I wanted to be, but coming back here rekindled a childhood dream of mine,” he adds. “I realised I wanted a life of adventure, the same life my parents had as pioneers of Siem Reap’s postwar revival, the same life that so many people have here in Cambodia, with a million wild stories to tell. The life I’ve had so far in Cambodia, I would never trade for anything in the world.”

His decision was helped along after a chat with his father about reviving a project to provide special accommodation to very special guests – retired elephants, a sanctuary for the noble beasts that the family owned and that had previously given rides to tourists at Angkor.

In 2003, David’s parents tried to launch an elephant sanctuary and retirement camp at Kbal Spean, but the project was shelved.

Then, during David’s one-year sabbatical in Cambodia, the idea was reborn, and, as David says: “The Angkor elephant rides had no place in the future, and so it was a good time to change.”

“We had to find the right model to follow as there are a multitude of different approaches to keeping elephants and many ethical considerations to account for,” David says. “For an entire year I had to travel around Asia meeting different experts in the field of elephants in order to get their input on what the ‘right’ path to follow was.”

“Although everybody had their own views on human-elephant contact and approaches to live in captivity, I ended up making up my own mind on what I felt was the right way,” he says.

Preparing the elephants for their lifestyle change in their new accommodation also presented problems as it wasn’t just a matter of finding a forest for them and letting them loose.

“Captive elephants must continue to be cared for as they are not able to survive alone in the wild,” David says, “This was challenging because it meant changing everything the mahouts knew of elephant care. Instead of sitting on their necks, the mahouts had to learn how to control their elephants on foot.”

“The elephants also had to re-socialise with one another, and we found out which elephants liked and disliked one another,” he adds.

The project was initiated in October 2017 and the sanctuary opened three years later in December 2019, after the arrival by truck of the two eldest elephants – Chi Tan and Sambann.

“I was so happy to see these old elephants finally have a taste of freedom, something that they had not fully known in their entire lives,” David says. “I was so afraid that Sambann, our oldest elephant, would not live to see the sanctuary, but she did.”

“To see them play around in the mud and walk wherever they wanted was one of the greatest moments of my life. Elephants are very emotive animals and you can tell when they’re happy straight away. When the other elephants arrived group by group in the following weeks, the herd formed and their excitement was unlike anything I had ever seen! Trumpeting, splashing in the water, running around. And all of this as a group. The transition was a great success for everyone,” he says.

Nothing is certain according to David, except that change is inevitable.

“The industry has already changed drastically, as this is the first worldwide crisis to ever be experienced by the modern travel industry,” he says.

“The business norms, pricing structures and product offerings have completely changed due to the pandemic and so a traveller cannot be sure they will be able to return to what they used to know about travel,” he adds. “However, nothing is certain, some things may revert back to the way they used to be, and some changes will be here to stay, only time will tell.” Khmer Times