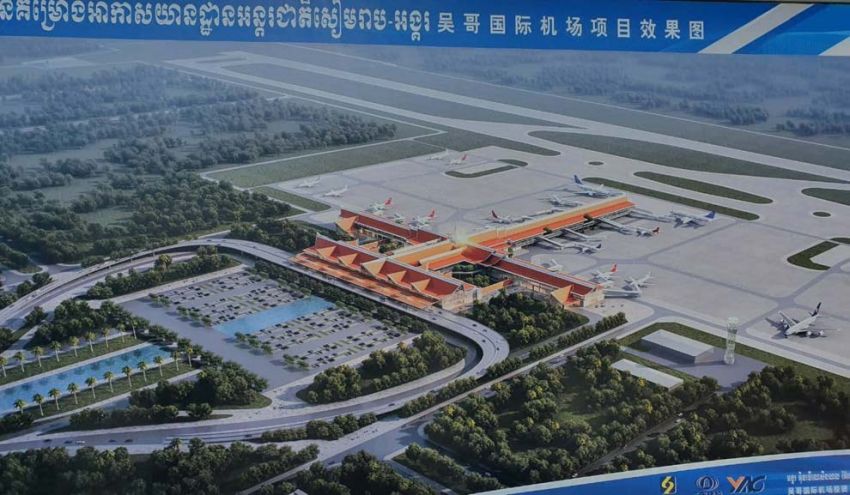 Construction on the new nearly-$900 million airport project in Siem Reap province will be 67 per cent complete by the end of next year, according to Angkor International Airport Investment (Cambodia) Co Ltd (AIAI) chairman Lu Wei.

Lu made the remark during a second visit by Mao Havannall, the minister in charge of the State Secretariat of Civil Aviation (SSCA), to inspect the project’s progress on December 23.

While the spread of Covid-19 has resulted in unprecedented disruptions, Lu said construction is more than 30 per cent complete since the project broke ground on March 15.

“On October 15, we started construction of the aircraft fuel depot, and on November 1, we started work in the flight area. So far, we have cleared 80 per cent of the land of the construction site,” he said.

In addition to the thoroughfare linking the project to National Road 6, the company has built an 8km road connecting National Road 64 to the passenger terminal, which will be paved soon, he said.

Fence-building and related works are underway for a 16.5km section of road that connects national roads 6 and 64, he said.

He said the company is currently in talks with Electricite du Cambodge (EdC), with plans in the pipeline to sign a memorandum of understanding with the state-run energy supplier next year for a new electrical substation and a 230kW power transmission line connecting to the project.

Havannall lauded the company’s efforts, despite the disruption fuelled by the Covid-19 pandemic, which has hampered construction projects nationwide.

“We appreciate the company and colleagues for their hard work. Without their efforts, we couldn’t have reached today’s achievements . . . As Mr chairman Lu Wei said, he overcame the circumstances in which we were living in – Covid-19.

The new airport is being built on a 750ha plot in Ta Yek commune, Sotr Nikum district east of Siem Reap town at a cost of $880 million. The project is being built in three phases.

AIAI will invest $500 million for the first and second phases, which will allow medium-sized and ranged passenger aircraft like the Boeing 737 and Airbus A320 to land. Another $300 million will be allocated for the third phase.

In October 2017, the government reached an agreement with Chinese state-run Yunnan Investment Holdings Ltd to build the new airport to serve Siem Reap.

The agreement gave the firm and its construction and airport management subsidiaries an exclusive 55-year build, operate, transfer (BOT) concession on the new airport, replacing the current exclusive agreement with Cambodia Airports, a company majority-owned by France’s VINCI Group, which was set to expire in 2040.