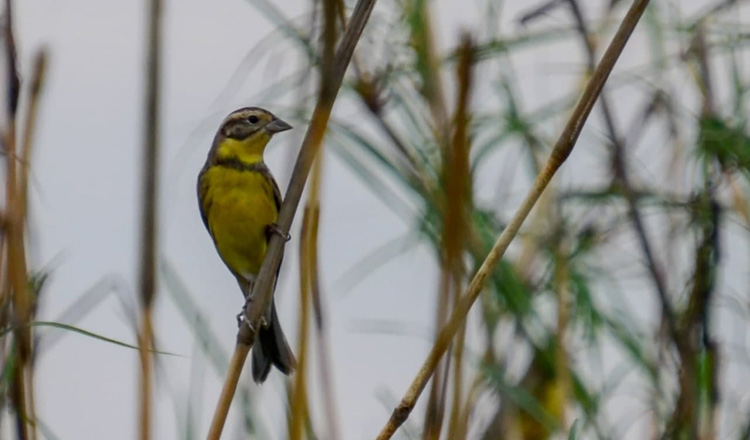 The rare Yellow-breasted Bunting (Emberiza aureola), a bird that is said to give a lot of positive and healing properties in Buddhist tradition, was confirmed on New Year’s Day as having returned to the Kingdom after a lapse of three years.

A team of field rangers on December 30 first spotted 20 of what looked like the critically-endangered birds flying in Boeng Prek Lapov but were only able to confirm the identity after spotting a stationary one on Friday.

The passerine birds in the bunting family Emberizidae which were found across the Boreal and East Palearctic has now disappeared from Eastern Europe, European Russia, large parts of Western and Central Siberia, and Japan.

The yellow-breasted bunting has now come under the EN category – endangered of extinction and is listed as critically endangered species in the International Union for the Conservation of Nature (IUNC)’s red list due to its population declining by about 80 percent in the last few years.

“On December 30, our field team at the same site had their first sighting of the Yellow Breasted Bunting, about 20 of them,” he said, adding that it was on New Year’s day they saw them perched at Boeng Prek Lapov.

He said they were delighted to have spotted these birds in Cambodia after a long time and felt that the wetland here still played a significant role in the return of such migratory birds, including the Sarus Crane, a large nonmigratory crane which is usually found in parts of the Indian subcontinent, Southeast Asia and Australia.

Cambodia had sighted huge flocks of the Yellow-breasted Buntings numbering more than 1,000 birds in the late 1990s but the number declined over the years to just a handful or sometimes only two birds.

The decline in this beautiful bird is attributed to substantial trapping during migration and most specifically at winter sites to be sold for consumption as “sparrows” or “rice birds”.

Besides the Yellow-breasted Bunting, the Red Avadavat or strawberry finch that is a sparrow-sized bird of the family Estrildidae, was also seen and recorded at Boeng Prek Lapov last month. Khmer Times