Checks and balances bid: Small parties band together to contest in polls 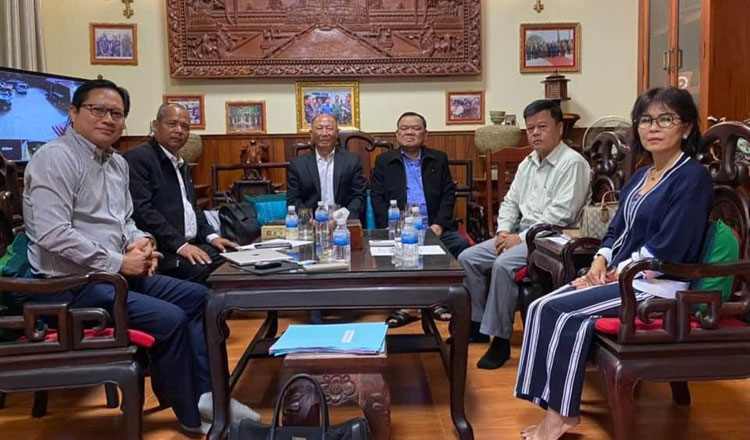 BSDP, KNUP and KUP representatives meet to decide on the formation of the League of Democrats. Facebook

Three Cambodian political parties have joined hands to create an alliance of democrats to contest in the next general election and ensure more checks and balances in Parliament.

But, analysts said the new alliance will not have any leverage to challenge the Cambodian People’s Party.

Sonando, BSDP president and head of the new political group, said the formation of the Alliance of Khmer Democrats (AKD), was intended to bring various political parties together in order to tackle problems in Cambodian society such as corruption and injustice.

“I have long had an intention to unite different political parties, because we are politicians who have similar ideas and common goals for the nation,” he said. “We care about peace and the youth. So, we met and discussed with each other and determined to create the Alliance of Democrats.”

However, he said the alliance did not want to challenge the ruling CPP and change the government of Prime Minister Hun Sen.

“We don’t want to be prime minister because we have seen a good role model in the leader, namely Samdech Techo [Hun Sen],” he said. “Samdech Techo played a key role in putting out the flame of war and creating peace. But, the enemies of peace are the irregularities in the Khmer society, such as injustice.”

Sonando said the AKD only wanted to contest in the election in a hope that they will get some seats and become proper representatives of the people instead of being appointed by Mr Hun Sen to the Supreme Consultative Council, in which all the heads of the three political parties are members.

Sonando said he hoped the alliance would stay strong and would not break down as with the case of previous political alliances, which became disunited after they had formed.

“For the three parties [in the alliance], we will not betray each other because we will not gain anything from betraying each other,” he said.

Sok Eysan, spokesman for the CPP, said he welcomed the creation of the AKD, saying it was the right of valid political parties and politicians in Cambodia.

“The creation of the alliance of the three parties is not against the law, especially the law on political parties,” he said.

However, Eysan said the newly formed alliance would not have any impact or ability to compete with the ruling party.

“As you know, the [Cambodian] People’s Party already has three black belts, so we welcome our potential competitors,” he said. “If they think the creation of their alliance will make them stronger, we also welcome them and we respect their will and political right.”

The spokesman said the creation of the AKD showed that political rights in Cambodia was comprehensive and that the international community had wrongly portrayed Cambodian politics.

Eysan said the creation of the AKD indicated that Cambodia was properly following the democratic process and respecting human rights.

“We think that if a society does not have democratic principles and respect for human rights, that society will not have political stability and people living peacefully,” he said.

Pech Pisey, executive director of Transparency International, said the forming of the Alliance of Khmer Democrats was a good thing in a democratic society.

“We welcome any groups that have the willingness to participate in the election process whether they create an alliance or their own political parties,” he said.

However, Pisey said he would like to see the return of the former Cambodia National Rescue Party to compete in the 2023 national election in order to strengthen the democratic process in Cambodia.

“We encourage any kind of facilitation for the main opposition party, which has been dissolved, so that they can return to the political arena in order to ensure that there is competition and people have choices in leaders and political parties,” he said.

Meanwhile, Kong Monika, president of the Khmer Will Party, said he also welcomed the creation of the AKD but that he didn’t think the alliance would last long.

“In the past Cambodia also used to have such an alliance of democrats. But, because of mistrust and lack of confidence in each other, it had led to their dissolution,” he said.

Monika said the new alliance would not be able to win much support from the people during the election and was not strong enough to compete with the ruling party.

“This new alliance of democrats will not attract a big number of voters,” he said. “So, I think it is very weak to have any impact on the ruling party.”

Monika said in the future Cambodian people will change the way they vote and that they will vote for parties with political agendas that they like.

“People will see which political parties are faithful with the people and put the interest of the people on the top and they will support those parties,” he said.

Chak Sopheap, Executive Director of the Cambodian Centre for Human Rights, said the new alliance might not be enough to prove to the international community that Cambodian democracy is now mature enough. But Sonando has already said that his alliance may not want to contest for the prime ministerial position. Instead, it just hoped to get some seats in the National Assembly to serve as the checks and balances. Khmer Times