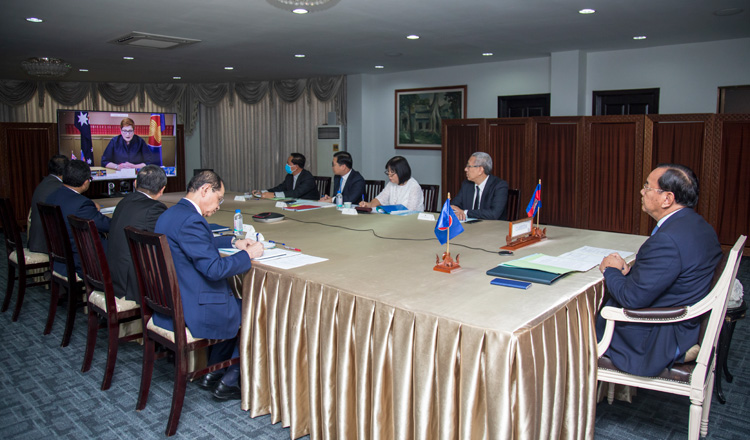 Foreign Affairs Minister Prak Sokhonn said yesterday Asean and Australia should “stay vigilant for a second wave of infection” of the coronavirus in the regions as countries around the world are beginning to draft their respective roadmap for easing restrictions.

His statement was made during the Special Asean-Australia Foreign Ministers’ Meeting (SAAFMM) on COVID-19 via video conference, where he emphasised the importance of joint efforts to fight the coronavirus in the regions.

Australia formally become a strategic partner with the ten-nation bloc in 2014.

The meeting yesterday was co-chaired by Malaysia, as Country Coordinator for ASEAN-Australia Dialogue Relations, and Australia.

According to the Ministry of Foreign Affairs, the meeting discussed ways to strengthen th partnership and cooperation in public health emergencies to combat the  COVID-19 pandemic focusing on three areas of shared interests, namely health security, stability, and economic recovery.

The meeting also touched on the future direction of the Asean-Australia Strategic Partnership for post-COVID-19 and looked forward to more active engagement between the two regions to coordinate joint responses to put a stop to this global pandemic.

Speaking during the meeting, Mr Sokhonn who is also deputy prime minister, said Asean has been very active since the beginning of the crisis in galvanizing collective response, not only between Asean member states but also with its external partners.

“The proactive approach of Asean can send a clear message that, in times of crisis, the international communities in fact need to ramp up coordinated and collective responses as well as international solidarity,” the ministry statement quoted Mr Sokhonn as saying.

He said Asean and Australia need to “stay vigilant for a second wave” of infection as countries are beginning to draft their own respective roadmap for easing the pandemic restriction.

“We must continue to intensify our efforts to defeat this pandemic together on all fronts as our respective governments have committed at the 73rd World Health Assembly,” Mr Sokhonn said.

According to the World Health Organization (WHO), as of yesterday, there were more than 150,500 confirmed cases of the coronavirus in Asean countries, including over 56,300 cases in Indonesia, 43,900 cases in Singapore and 37,500 cases in the Philippines.

Mr Sokhonn noted that as part of the economic recovery plan, concrete action can be taken through the signing of the Regional Comprehensive Economic Partnership at the earliest possible time.

“Asean and Australia should work collaboratively at all levels to develop, test, and scale-up production of quality, safe, and affordable medicines and vaccines for the COVID-19 pandemic and ensure unhindered and timely access to the populations in need,” he added.

In her statement released after the meeting, Ms Payne said during the discussion that she made a $23 million commitment to help Asean bolster health security, economic recovery and stability in our region.

“This package complements Australia’s wide-ranging Strategic Partnership with Asean as well as the substantial bilateral work already underway with our Southeast Asian neighbours and our significant contributions to global efforts to fight COVID-19,” she said.

During the meeting, Mr Sokhonn also thanked Australia for providing financial support to strengthen Cambodia’s public health system through the Health Equity and Quality Improvement Project, as well as providing more direct support for the Kingdom’s medical response to the virus.

Speaking during the 36th Asean Summit via video conference, under the theme “Cohesive and Responsive ASEAN” on Friday, which was chaired by Vietnam, Prime Minister Hun Sen called for a “collective response and solidarity” based on multilateralism in the region to fight the virus.

He noted the virus has brought about a number of challenges, including public health safety, disruption in the mobilisation of the global supply chain as well as severe social impacts amid a global economic downturn.

“In this context, the collective responses and solidarity based on multilateralism, especially under the UN framework, is indispensable,” Mr Hun Sen said. “Truly, this is not the time for a blame-game, discrimination, or disengaging allies based on political agenda.”

The Asean Chairman’s Statement at that time also said Asean recognised the unprecedented challenges posed by the pandemic in the region and the world.

“We noted with grave concerns the human cost and socioeconomic impacts of COVID-19 and reaffirmed our commitment to implementing targeted policies to assure our peoples that Asean is at the forefront of this critical battle and future crises,” it said.