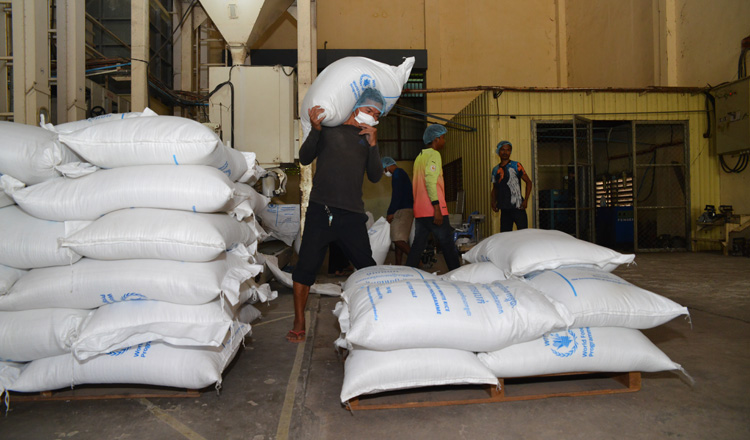 Rice is loaded ready for distribution by the World Food Programme. KT/Pann Rachana 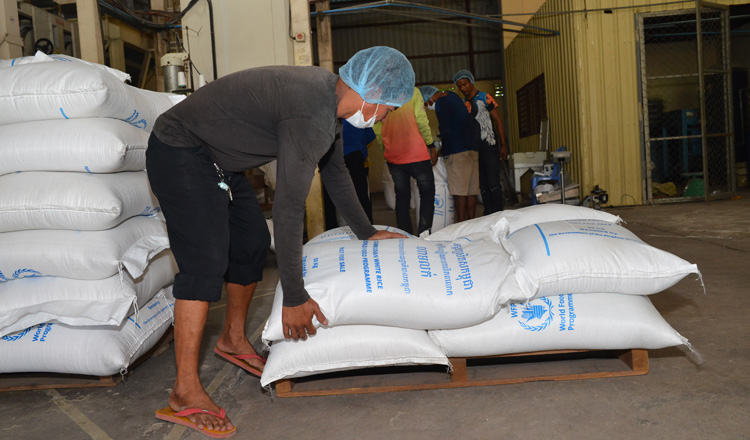 In order to mitigate the impacts of the pandemic on Cambodia, the World Food Programme (WFP) in cooperation with the Ministry of Education will conduct the second phase of food aid for five provinces in the Kingdom to respond to the current crises.

The WFP confirmed it will distribute food assistance to vulnerable households in five provinces, including Siem Reap, Pursat, Kampong Thom, Kampong Chhnang and Oddar Meanchey from June 30 to July 3, as part of the “Take Home Rations Strategy” program.

“As the demand for food is still very high for those in vulnerable households and due to the extension of school closures, the WFP project will distribute rice and vegetable oil to approximately 82,700 households, who have been adversely affected by COVID-19,” said the press release.

This relief program is the second WFP food distribution effort aimed at helping vulnerable households better cope with the shortage of food supplies.

The first food distribution program provided aid to 80,767 children of households registered with ID-Poor and supported the education ministry with distribution to a further 11,506 more children in schools.

Talking to Khmer Times, Franceseca Erdelmann, country director of the WFP in Cambodia said in collaboration with the Ministry of Education, the WFP will provide take-home food rations for poor families holding ID-Poor 1 card, ID-Poor 2 card and equity cards. The rations will be organized by a joint team from the two bodies.

“All students in the 908 program-supported schools across five provinces will have food to eat despite the school closures. We estimate that approximately 1,000 tonnes of rice will be distributed to thousands of students from poor families,” Ms. Erdelmann added.

According to the WFP, issues arising from malnutrition are estimated to cost Cambodia 1.7 percent of its annual GDP and is a major contributor to poor health and mortality. Khmer Times