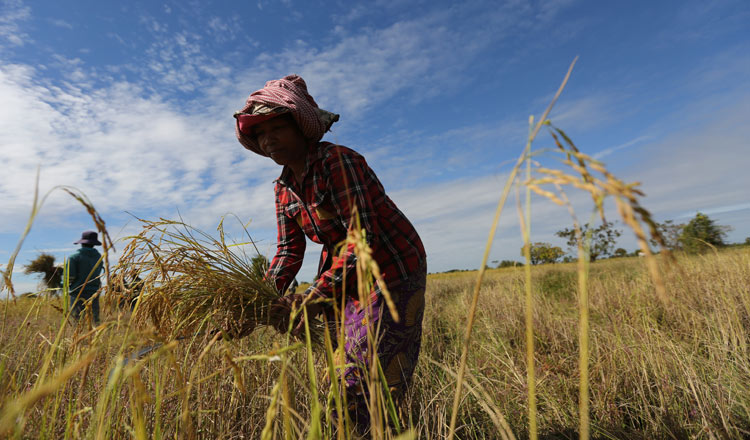 Not much scope in farming for unemployed workers, says World Bank. KT/Chor Sokunthea

Cambodia’s agriculture sector is unlikely to be able to substantially absorb laid-off workers from the garment and tourism industries, according to a World Bank report. In a report titled, “Economic Update for Cambodia in a time of COVID-19,” it notes the weak performance of the farming sector.

The bank says recent efforts to modernise the agriculture sector have intensified as Cambodia endeavours to increase productivity within its major crops.

“In this regard, there are signs that the sector is slowly modernising by leveraging advanced cultivation techniques and new seeds made possible by technology diffusion via foreign direct investment,” it said adding that while it is still too early to draw conclusions, Cambodia’s exported agricultural products have slowly expanded to include new products such bananas and soon mangoes.

Meng Sakphouseth, country programme officer to Cambodia for the International Fund for Agricultural Development (IFAD) said that the agriculture is the sector that can most easily temporarily absorb the workers.

“While we know that farming is not the first choice for many young Cambodians because they prefer to work within the industry or the tourism sector, they have to do what they can to survive and help their families,” he said.

IFAD said it is working with the Cambodian government to leverage “a programmatic approach” to ease the economic distress and prevent food security stresses caused by the COVID-19 pandemic.

The collaboration is focusing on addressing the immediate economic needs of rural communities by creating opportunities for returning migrant agricultural workers and expanding prospects for smallholder farmers through enhanced production support.

Sakphouseth also said it’s imperative for the government to facilitate increased production from the agro-industry to help create further jobs.

The global COVID-19 outbreak has already severely affected the services sector, especially the hospitality and tourism industry, which provides 620,000 jobs and hundreds of thousands of garment workers.

Speaking in Sihanoukville on Monday, Prime Minister Hun Sen said Cambodia has seen 256 garment, footwear and travel goods factories in Cambodia suspend their operations because of the COVID-19 pandemic, affecting more than 130,000 workers.

He said around 169 companies in the tourism sector had also been closed temporarily, leaving a further 16,891 people unemployed.

A report released by the Ministry of Labour in April shows that garment workers returned to their home provinces following the Khmer New Year, primarily to look for alternative employment in the agricultural sector.

According to the World Bank, at least 1.76 million jobs are currently at risk because of the COVID-19 outbreak. The collapse of the growth drivers has not only hurt economic growth but has also caused unemployment to soar to nearly 20 percent.

“It is estimated that the three main growth drivers – tourism, manufacturing exports and construction – that account for 71 percent of growth and 20 percent of total employment have been most directly affected by COVID-19,” the report said.