$880m Siem Reap International Airport to be ready in 3 years 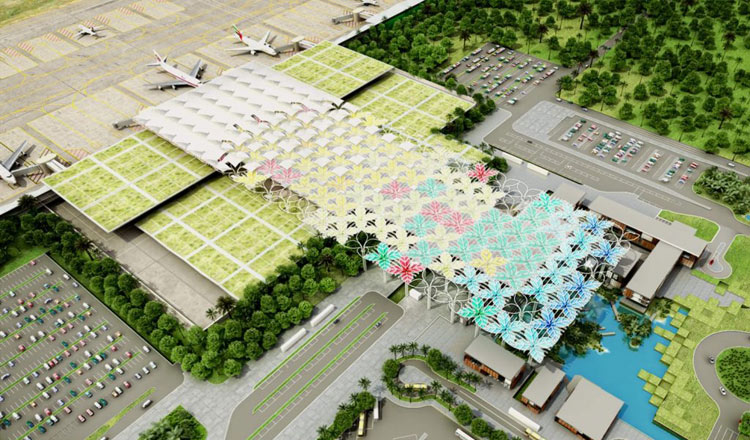 An designers impression of the new Siem Reap International airport set for completion in 2023. / Supplied

The new airport – set to be the largest in Cambodia – will be located 51km South-East of downtown Siem Reap and 40km from Angkor Archaeological Park and will cover an area of around 700 hectares.

In a meeting this week with Mao Havannall, State Secretariat of Civil Aviation and Lu Wei, the director of Angkor International Airport Investment (AIAI). it was announced that the construction of the new airport began on March 15 this year and will take 36 months to complete.

Mao Havannall also expressed strong support for the project and urged the company to finish construction by the scheduled date, while praising the good relationship between both Cambodia and China as a result of the investment.

Angkor International Airport Investment (Cambodia) Co Ltd operates under the Chinese state-run Yunnan Investment Holdings Ltd (YIHL) after the company signed a 55-year concession with the Cambodian government for the new airport in 2017.

The company will be responsible for the construction of the flight area and the auxiliary facilities that include the terminal, foundations, earthworks, slopes, the runway and drainage engineering.

Once the first phase of the new airport is completed, the airport is expected to receive 7 million passengers annually, greatly facilitating aviation and the tourism development of Siem Reap province and boost the economy of Cambodia for which tourism is a pillar industry, the construction firm said.

The airport will be the company’s first overseas airport project and is considered part of the Belt and Road Initiative for the group to expand into overseas markets.

Sin Chansereyvutha, a spokesman at the State Secretariat of Civil Aviation told Khmer Times this week said the project has actually already started because the earthworks have been 30 percent completed.

“Unfortunately the COVID-19 pandemic has been affecting the work because the Chinese technical experts could not fly to Cambodia. However this is not a risky investment because we have studied the details and we believe in the great potential of the project,” he said.

The main reason for building the new airport and not just expanding the old one is because of the current limitations of the existing Angkor International Airport in Siem Reap.

The airport, which is operated by Cambodia Airports and only located 5 kilometres from the famous ancient temple complex and world tourism site Angkor Wat only has one runway. Expanding

the airport has conservation groups concerned more additional run- ways will result in increased vibrations caused by the take-off and landings of aircraft and may damage the foundation of Angkor Wat, according to officials.