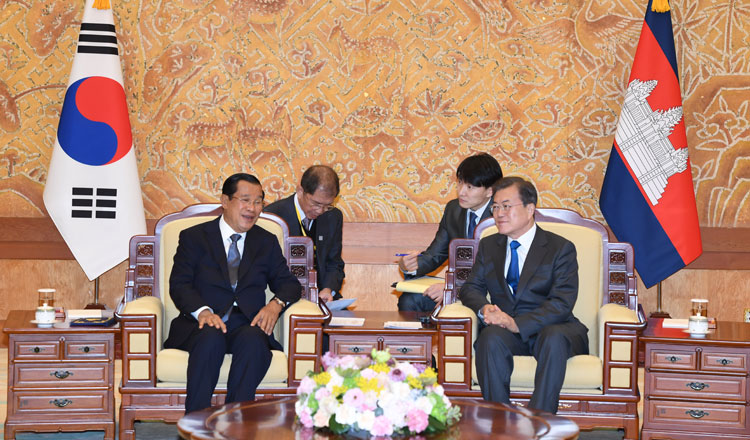 The premier announced the news during a meeting with more than 1,000 Cambodians in Seoul, Korea, during the Universal Peace Federation (UPF) World Summit 2020 yesterday. The event will be concluded today.

He noted that two-way trade volume recorded a total of $1,032 billion in 2019. Of that, the Kingdom’s exports to South Korea amounted to $335million and Cambodia imported goods from the country valued at $696 million.

“This is an imbalance in trade, of course, and this is because of our high demand for South Korean goods, mostly automobiles and televisions,” said Mr Hun Sen, who added the trade volume would not increase without good diplomatic relations between the two countries. Cambodia also imports linen, beverages, electronics including home appliances, pharmaceuticals and plastic products from South Korea.

“Trade volume between Cambodia and South Korea has continuously increased. This cannot be separated from the good diplomatic relations between the governments,” he pointed out.

The two governments have been exchanging insights to encourage trade and tourism investment including more direct flights between the two countries, according to premier Hun Sen, who believes a direct route will bring more investments and increase the number of incoming tourists.

Currently, there are 50 flights per week between Cambodia and South Korea, which is among the top 10 for arrivals in the Cambodia tourism market. Last year, the Kingdom welcomed a total of 254,874 visitors from the country, a 15 percent decrease in the previous year.

In addition, the relationship between the countries is also reflected in the fact that more than 400 Cambodian students are pursuing university degrees and more than 65,000 Cambodian workers are employed in the country. According to the prime minister, those workers send about $400 million combined to their parents every year.

According to the Council for the Development of Cambodia (CDC), a government agency that oversees investment, there are 215 registered South Korean projects with the CDC, with a combined investment of nearly $5billion from 1994 to 2019. South Korea is also the second-largest foreign direct investor in the Kingdom after China.

Prime Minister Hun Sen highlighted that the two governments have already begun conducting a feasibility study over a free trade area agreement. “Once it comes into reality, this will allow Cambodia another opportunity to expand its market in South Korea,” he said.

In late November last year, an agreement to conduct the study was signed between South Korea’s Trade Minister Yoo Myung-hee and Cambodian Commerce Minister Pan Sorasak in the Korean city of Busan. It could take a year.

The free trade agreement is deemed to be a crucial trade mechanism, which will help South Korean firms to penetrate deeper into the Southeast Asian nation with prominent growth potential, while also allowing the Kingdom a new potential market for its exports.

South Korea’s free trade deals with Singapore and Vietnam went into effect in 2006 and 2015, respectively.