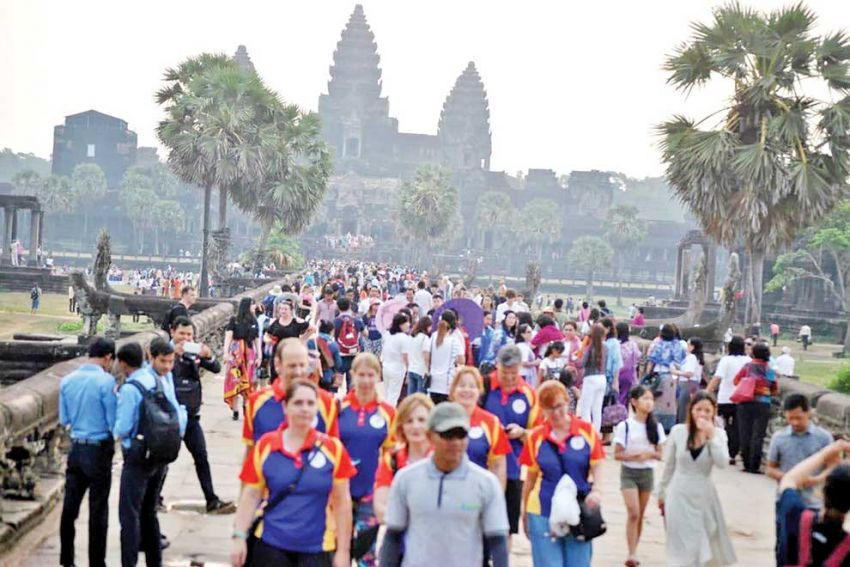 Cambodia received a total of 151,680 international tourists “in the first quarter of 2022”, marking a 114 per cent surge year-on-year – a positive signal for the recovery of an industry still reeling from more than two years of the Covid-19 crisis, according to a senior Ministry of Tourism official on March 30.

Ministry director for Statistics and Planning Kong Sopheareak told a press conference that tourist arrivals by air and land respectively reached 86,588 and 63,048 in January-March, rising by 158.2 per cent and 68.7 per cent year-on-year. Those entering the country by waterways numbered 2,044.

At the same time, Minister of Tourism Thong Khon says travel across the Kingdom will pick up during the upcoming Khmer New Year holidays despite the notable rise in fuel prices, reasoning that sightseers will find ways to cut costs, such as by taking trips in larger vehicles in groups.

He added that “many” hotel reservations have been made in Siem Reap and Mondulkiri provinces, as well as Sihanoukville and coastal areas. “I hope people will be ready to hit the road and enjoy themselves during the coming Khmer New Year,” he said. Khmer New Year proper falls on April 14 this year.

“Correspondingly, the ministry has issued instructions on how to prepare for national and international tourists, including by arranging the best possible entertainment venues that are safe, clean, of quality, and provide good services, but most importantly, they contain tips on how to avoid raising prices on services and foods,” Khon said.

Kan Chansatya, general manager of Siem Reap town’s Lynnaya Angkor River Resort and Spa, told The Post on March 31 that although the hotel was beginning to see an uptick in reservations – exclusively from national residents – it had not yet recuperated its full occupancy rate.

However, he said, the coming holidays will most likely bring in more guests. “During Khmer New Year this year, although the Covid-19 situation persists, there may be more visitors to Siem Reap, given the slew of improvements that provincial authorities have made in infrastructure, both in cities and around tourist attractions.

“Additionally, tourism businesses in the province have properly implemented protective measures in accordance with the Ministry of Health and the Minimum Standard Operating Procedures [SOP] standards of the Ministry of Tourism, which could inspire confidence in tourists.

“However, spending among domestic tourists is still quite low, which contrasts with foreign guests who have to shell out money for accommodation,” Chansatya said.

Chhin Chanra, the owner of The Freedom Guesthouse, said reservations for rooms over the holidays were still low, but explained that guests tend to book just “two or three” days in advance during major national holidays.

He remarked that prices for accommodation during the holidays had generally increased somewhat, but only slightly at his establishment “so that tourists are able to afford to stay there”.

“With the Covid-19 crisis easing up a bit, guesthouses and hotels have high hopes, specifically for the major holidays when lots of local visitors make trips, which helps business owners survive in these difficult times.

“I understand that even if our country reopens, if others retain their restrictions, we won’t be able to receive international visitors,” he said.

The tourism and travel industry accounted for 1.8 per cent of gross domestic product (GDP) in 2021, down from the three per cent and 12.1 per cent recorded in 2020 and 2019, respectively. Phnom Penh Post