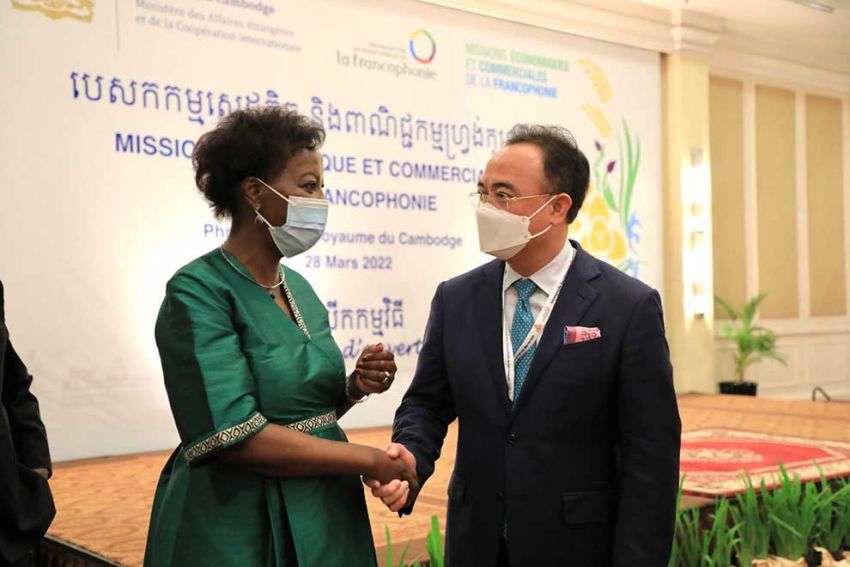 Cambodia Chamber of Commerce (CCC) president Kith Meng encouraged the 88 member states and governments of the International Organisation of La Francophonie (OIF) to consider investing in the Kingdom in the areas of agro-industry, sustainable energy and technology.

The OIF is an international organisation that represents regions, countries and territories where there is a significant affiliation with the French language or culture.

The CCC president made the appeal at a high-level economic forum held in Phnom Penh on March 28, jointly organised by the Ministry of Foreign Affairs and International Cooperation and the OIF.

Meng said that Cambodia has been one of the fastest growing economies in the region over the past few decades with an average annual growth rate of seven per cent. The Kingdom is currently under the lower-middle income band and is on track to become a high income economy by 2050, he claimed.

He upheld that despite the impact caused by Covid-19 crisis, Cambodia remains one of the region’s fastest recovering economies thanks to the “right and timely” measures taken by the government to revitalise business and economic activities.

Meng argued that the Kingdom is a safe destination for visitors and investors, explaining that vaccination rates are among the world’s highest, with 92 per cent of the estimated 16 million population having received at least a first Covid-19 jab.

“There’s been no production stoppage in Cambodia. The spread of Covid-19 has been put under control. The country now is reopened to welcome all investors and businessmen.

“There is no requirement for a PCR test prior to arrival in Cambodia or rapid test upon arrival – all you need is a vaccination card. The visa-on-arrival service has resumed as well,” he said.

Foreign minister Prak Sokhonn, who presided over the event, underscored that in just over two years, the world has gone through dramatic changes and now faces a new set of challenges.

The top diplomat welcomed OIF secretary-general Louise Mushikiwabo on her official visit to Cambodia to lead the first Economic and Trade Mission of La Francophonie in Southeast Asia and signing ceremonies for documents related to cooperation between professional trade and economic organisations.

He said the OIF “embodies the spirit of multilateralism that the world needs now more than ever. We hope that this will always prevail amid periods of uncertainties and volatilities”.

The CCC’s Meng urged all business delegates from OIF member states to explore the potential offered by Cambodia in the three sectors highlighted at the forum’s panel discussions – agro-industry, sustainable energy and technology.

“I encourage you to seek partnerships in these sectors and also study other areas beyond. I believe there’s a lot that we can cooperate on and we should work closer together for mutual benefit.

“I, as the president of the Cambodia Chamber of Commerce and chair of the ASEAN Business Advisory Council, and my team from the private sector are pleased to offer support to Francophonie businessmen that seek business opportunities to grow together,” he said.

Trade between Cambodia and West African countries remains limited. The Kingdom’s imports from and exports to the Ivory Coast were $14,070 and $3.11 million in 2020, according to Trading Economics. “Cocoa and cocoa preparations” made up the entirety of imports, while “cereals” accounted for $3.07 million of exports.

On the other hand, trade with Benin has been minimal, comprising solely of Cambodian exports from 2016-2019, with “miscellaneous chemical products” making up 100 per cent of 2019 trade, at about $49,610, the latest figures from the statistics website indicate. Phnom Penh Post