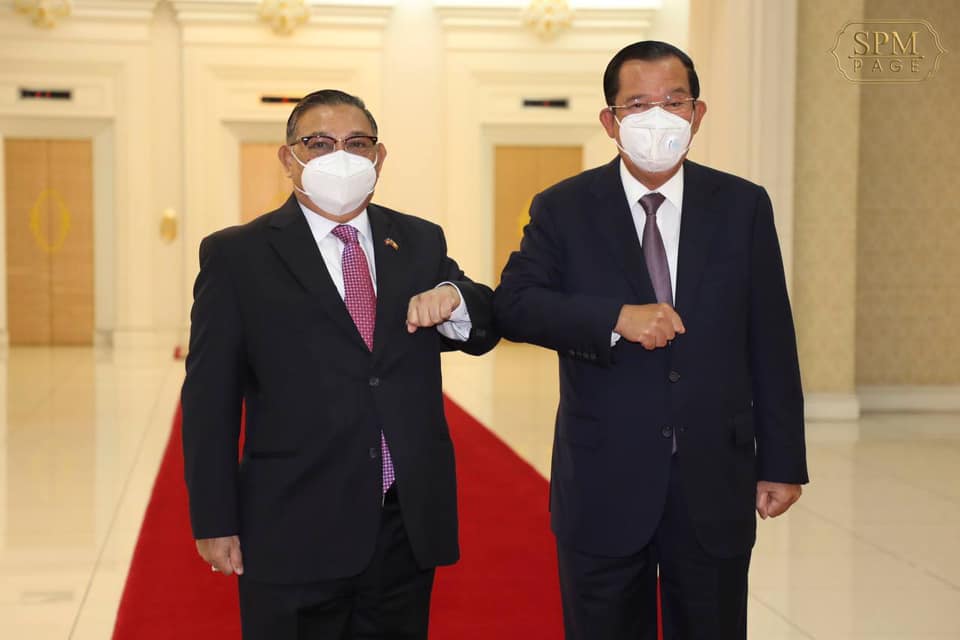 Prime Minister Hun Sen said there was a strong possibility that he would travel to Myanmar to meet with Min Aung Hlaing, chairman of the ruling State Administration Council (SAC), in Naypyidaw to find a solution to the country’s ongoing crisis so that it could resume full participation in ASEAN.

General Min Aung Hlaing is widely accused of carrying out a “military coup” against the civilian government of the predominantly Buddhist country.

“If we don’t work with the person in charge and those who are in power and control Myanmar, then whom will we work with? Nobody needs to criticise Cambodia right now because Cambodia knows how to work on this,” Hun Sen said while presiding over the opening of National Road 11 in Prey Veng town.

Hun Sen’s statement came after Myanmar was pointedly excluded from the recent ASEAN summit by the other member nations due to the crisis there, where elected civilian leader Aung San Suu Kyi was detained for “inciting dissent against the military and breaching Covid-19 rules”. Suu Kyi was sentenced to four years in prison for those charges on December 6.

Cambodia’s possible diplomatic intervention in the ongoing crisis stems from the Kingdom’s leadership role as chair of ASEAN for the coming year.

“Most likely, I will have to visit Naypyidaw to meet with General Min Aung Hlaing and work with him,” he said, adding that as a member of the ASEAN family, Myanmar has the right to attend meetings and summits.

“We’ll keep this as a task for Hun Sen to deal with. Let’s wait and see. We can’t stray from ASEAN’s common principles or the ASEAN Constitution which mandates non-interference in the internal affairs of other countries. And we won’t try to apply the UN formula to ASEAN, they aren’t the same thing,” he said.

The prime minister said he had already made it clear in talks with Indonesia and Japan that ASEAN should not burn its own house down to serve the whims of others. He said ASEAN must be strengthened and bring its membership back to 10 countries, not nine like in recent meetings.

Hun Sen said Myanmar has never declared that it wishes to leave ASEAN and it is still cooperative with the 10-nation bloc.

He noted that according to the ASEAN Constitution, no member can be expelled by any other member because ASEAN makes all decisions on a consensus basis, so any country proposed for expulsion would have the opportunity to veto it.

Hun Sen will meet Myanmar foreign minister Wunna Maung Lwin on December 7 in Phnom Penh to understand the country’s current leadership better and get a response to the ASEAN five-point consensus, a plan of action established by ASEAN members to guide Myanmar out of its turmoil. The five-point consensus also enjoys strong international backing outside of ASEAN, including support from the US.

Kin Phea, director of the Royal Academy of Cambodia’s International Relations Institute, believes that Hun Sen is capable of solving the Myanmar crisis. He noted that Hun Sen began his political career as foreign minister throughout most of the 1980s and engaged extensively with world leaders in that period, including many Asian countries as well as highly successful official visits to Washington, DC, and Paris.

“He is a veteran diplomat with experience and strategy and also good at solving problems. He had experience in ending the civil war in Cambodia, which brought about comprehensive peace for the country.

“I think he should go to Myanmar and engage in open diplomacy on a private basis and try to calm the situation there and return things to how they were before last February,” he said.

In addition to meeting with General Min Aung Hlaing, he said Hun Sen should also meet other leaders involved in the Myanmar crisis, including those representing the deposed civilian government and, if possible, the opposition groups protesting as any solution must be inclusive to all relevant parties.

“The solution should be for everyone, not just for a certain group. It should be a win-win solution. If they find a compromise with all sides involved, then it will be acceptable to everyone.

“Cambodia must follow all ASEAN principles, especially the five-point consensus made in April, which is a guideline that it can use as a starting point.

“The country must be clever in persuading other ASEAN leaders to accept Cambodia-led initiatives because ASEAN makes decision on consensus basis,” he said. Phnom Penh Post