Cambodia’s Ministry of Foreign Affairs and International Cooperation this evening issued a press release on the outcomes of the 6th Mekong-Lancang Cooperation Foreign Ministers’ Meeting and the bilateral meeting between Cambodian and Thai Foreign Ministers, held yesterday in Chongqing, China.

The 6th MLC Foreign Ministers’ Meeting, which was held under the theme “Solidarity against the COVID-19, Joint Efforts for Post-Pandemic Development”, was co-chaired by His Excellency WANG Yi, State Councilor and Minister of Foreign Affairs of the People’s Republic of China, and His Excellency U WunnaMaung Lwin, Minister of Foreign Affairs of the Republic of the Union of Myanmar, with the participation of Foreign Ministers of Cambodia, Lao PDR, Thailand and Viet Nam.

On this occasion of commemorating the 5th anniversary of the MLC, the Ministers praised the overall progress made in the implementation of the outcomes of the Five-Year Plan of Action on Mekong-Lancang Cooperation (2018-2022), and jointly launched the New Website of the MLC China Secretariat, as well as the MLC Design Award and the Online Communication Platform “Mekong-Lancang Youth Online”.

The Ministers commended the MLC countries for working together to fight the COVID-19 pandemic. They called for strengthening the joint cooperation on important medical supplies and vaccines, sharing experience on outbreak response, and fully utilizing the MLC Special Fund for Public Health for addressing the current and future pandemic.

The Ministers appreciated the MLC Special Fund for supporting over 500 projects in numerous areas including water resources, agriculture, education, poverty reduction and health since its establishment, and praised the six countries for making great efforts to implement their projects during the pandemic despite the difficulties. The Ministers welcomed the List of the Projects Supported by MLC Special Fund 2021, in which a total of 12 Cambodian projects have been approved, accumulating to a total sum of 67projects for Cambodia.

Taking this opportunity, His Excellency Deputy Prime Minister PRAK Sokhonn stressed that the MLC must continue to show solidarity in addressing this global health crisis and attach high priority to ensure adequate access to vaccines and medications as global public goods. In this regard, he spoke highly of China’s commitment and its leading role in providing important medicines, medical supplies and millions of doses of COVID-19 vaccines in a timely manner to the Mekong countries.

His Excellency Deputy Prime Minister underlined the need to further enhance agricultural cooperation and recalled the 3rd MLC Leaders’ Meeting last year when Samdech Techo Hun Sen expressed his support to Premier Li Keqiang’s proposal to import more quality agro-products and livestock from Mekong countries, which recently saw the export of fresh mangoes from Cambodia to China, in addition to existing shipment of other fruits and agricultural products.

His Excellency Deputy Prime Minister also expressed Cambodia’s support to the joint study on the Changing Pattern of Hydrological Conditions of the Lancang-Mekong River Basin and Adaption Strategies, which is being conducted by the Mekong River Commission Secretariat and the Lancang-Mekong Water Resources Cooperation Center.

Finally, His Excellency Deputy Prime Minister highlighted the significance and the complementing role of the MLC with other sub-regional mechanisms including ACMECS and Greater Mekong Sub-region (GMS), and underscored the dynamism and potential of this cooperation to foster structural transformation in building resilience to promote quality of growth, as well as enhancing regional economic cooperation among and within the ASEAN member states. 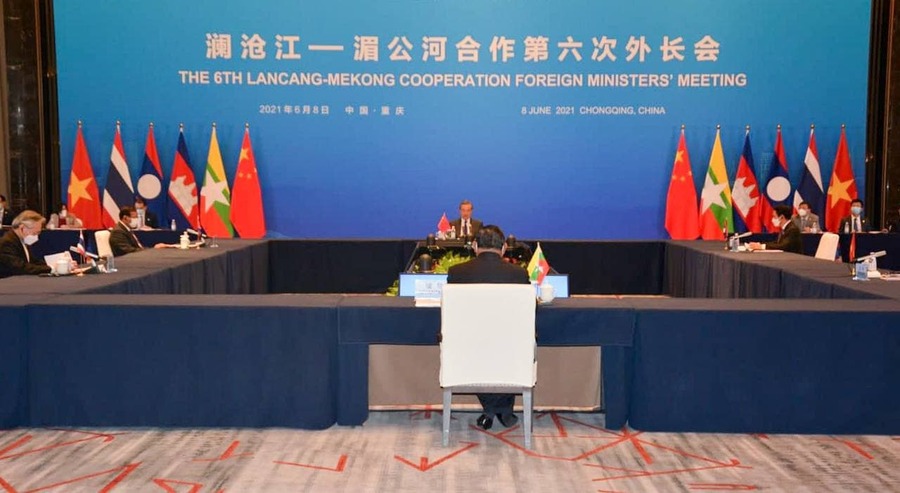 His Excellency Deputy Prime Minister PRAK Sokhonn also held a talk with His Excellency Don Pramudwinai, Deputy Prime Minister, and Minister of Foreign Affairs of the Kingdom of Thailand, to discuss bilateral relations and multilateral cooperation for the common interest of the Cambodia and Thai peoples. Both Foreign Ministers underscored the vital importance of joint collaboration of the two countries in fighting against COVID-19 particularly along the border areas. Deputy Prime Minister Prak Sokhonn praised Thailand for successfully producing vaccines, and thanked the Royal Thai Government and the private sector for their donation and assistance to Cambodia in controlling the COVID-19 outbreaks as well as for taking care of the Cambodian people who are working and living in Thailand.

In order to reach the two-way trade target of 15 billion USD set by the two Prime Ministers at the 3rd Joint Cabinet Retreat, the two Ministers encouraged the relevant authorities of both sides to double their efforts in facilitating trade flow across the border check-points. Both sides agreed to hold the11th Meeting of the Joint Commission for Bilateral Cooperation between Cambodia and Thailand later this year or earlier next year in Cambodia and hoped this meeting could beconvened face-to-face.

The two Foreign Ministersalso strongly committed to supporting each other in multilateral frameworks, including ASEAN and ASEM, as well as reaffirmed their strong commitments to working closely to further strengthen the traditional bonds of friendship and goodneighbourliness between the two Kingdoms. AKP