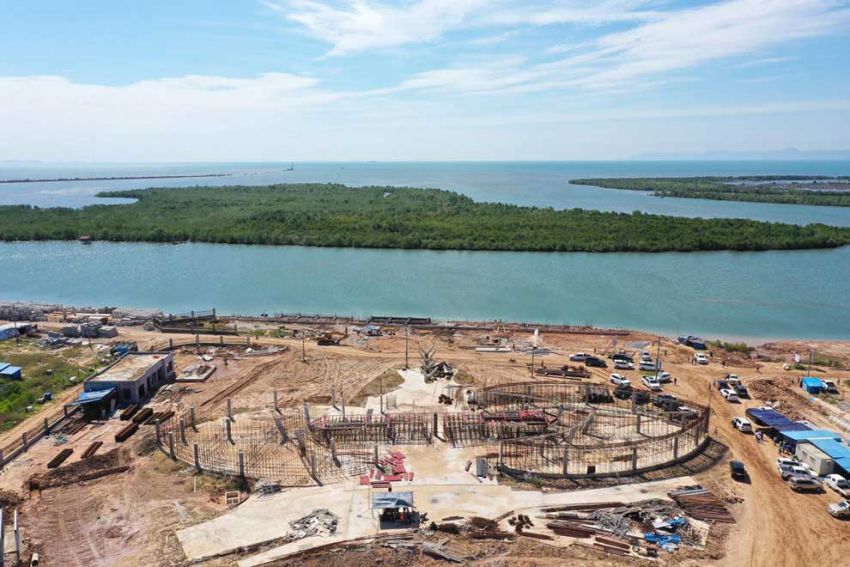 Minister of Public Works and Transport Sun Chanthol called for work on Kampot International Tourism Port to be sped up so that the seaport can operate by the end of this year.

Built on 4ha in Kampot province’s westernmost Teuk Chhou district some 6km from Kampot town, the seaport is now more than 45 per cent complete, according to the minister.

With a water depth of 4.5m, the port is financed by the Japanese-led multilateral lender Asian Development Bank (ADB) and is expected to cost around $8 million.

During a January 4 inspection, Chanthol noted that the project was behind schedule and called on the developer to pick up pace and resubmit a revised action plan as soon as possible.

He said: “We are late, this isn’t good, the ADB and the Ministry of Tourism are not happy – none of us are happy at all.

“The construction company should recruit more people – work is very slow – but no technical mistakes should be made either. Only then will it be done in six months, as promised to the Ministry of Economy and Finance – to have it operable in December.”

According to its representatives, the company is working day and night to finish construction by June as planned by the finance ministry and complete the entire project by year’s end.

Kampot provincial Department of Tourism director Soy Sinol told The Post on January 5 that this was another unprecedented new tourism product for Kampot.

The seaport will welcome international tourists via waterways and also provide transportation services to the islands, he said. Kampot will be bundled with other tourist destinations in package tours offered in neighbouring countries.

“Cambodian and Vietnamese islands have enjoyed a massive transformation of development. Once [the port] is in use, Kampot will be able to receive more tourists from neighbouring countries,” Sinol said.

The seaport will be able to accommodate cruise ships carrying 200-300 passengers, according to Sinol.

She said: “With the government fast-tracking construction of Kampot’s tourist port and a whole host of new infrastructure across the provinces – especially those flagged for their tourism potential, the sector will take on a new lustre after the crisis of the Covid-19 epidemic has ended.”

The seaport will be able to serve 360,000 international and domestic tourists a year, the ADB said in a report on tourism in the Greater Mekong Subregion (GMS).

During the New Year holiday from December 31 to January 3, Phnom Penh and the Kingdom’s 24 provinces counted 1.27 million visitors, of which 1.26 million were domestic and 11,103 were international, according to the tourism ministry.