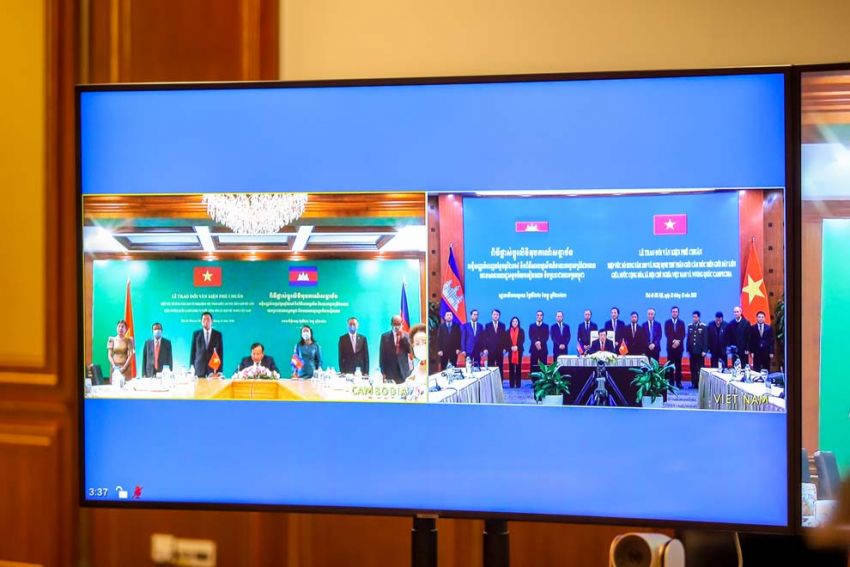 The Kingdom’s bilateral trade with neighbouring Vietnam reached a record $5.27 billion last year, one point among several that were lauded by both governments in a December 22 video conference.

Minister of Foreign Affairs and International Cooperation Prak Sokhonn and his Vietnamese counterpart Pham Binh Minh held the 18th meeting of the Cambodia-Vietnam Joint Commission on Economic, Cultural, Scientific and Technological Cooperation, with both sides praising their mutual progress and reaffirming commitments to further strengthening cooperation.

The two ministers expressed their appreciation for effective cooperation and mutual support in the prevention and fight against the Covid-19 pandemic while sustaining cross-border flow of trade in goods and maintaining investments.

They both expressed satisfaction with the strong development of cross-border economic activity as trade volumes exceeded target goals and pledged to facilitate an expansion of imports and exports between the two countries.

A press statement by the Cambodian foreign ministry detailed topics addressed in the meeting: “[The two ministers] reiterated their strong commitment to joint efforts in containing illegal [resource-] exploitation activities and cross-border transportation and trading of timber and wildlife, and in strengthening cooperation in the fields of agricultural sanitation, phytosanitary certification, fisheries, farming, livestock production and irrigation systems.”

The two nations “have agreed to enhance cooperation to bring about effective and sustainable utilisation, management and development of Mekong water resources and also promote environment protection and conservation, climate-related action, green growth and land management,” the statement said.

Both countries signed the Agreement on Border Health Quarantine in 2006, and the ministers said they will continue to effectively uphold the agreement and cooperate closely in responding to and preventing the spread of Covid-19 and other outbreaks at the borders in a timely manner.

Regarding the shared border, the ministry explained that both sides repeated their dedication to respecting and fully implementing all relevant border treaties and agreements they had previously signed. The Joint Commissions on Demarcation and Adornment for Land Boundaries would actively work towards finding mutually acceptable solutions in accordance with international law for the 16 per cent of the land boundary which remains undemarcated.