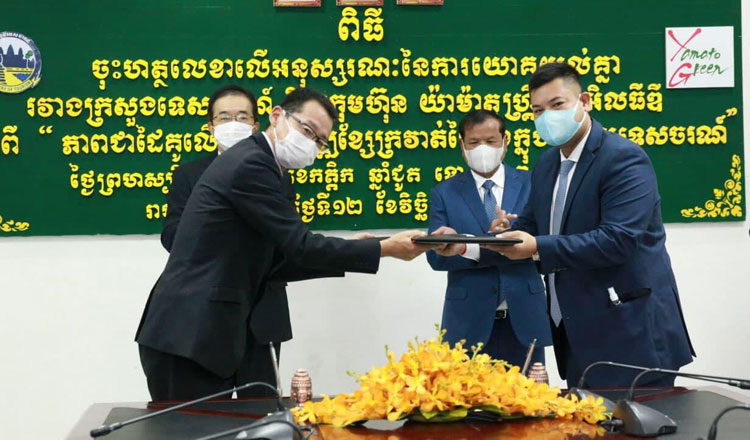 Thong Rathsak, director-general of tourism development and international cooperation at the Ministry of Tourism (R) and Nabeshima Katsuhito, Founder and President of Yamato Green Co Ltd at the MoU signing ceremony. Ministry of Tourism

The agreement aims to support Cambodian farmers’ efforts in improving their growing techniques for vegetables and other crops with Japanese technology.

This will help farmers produce a high-quality, safe vegetable supply for the Cambodian market, especially in the tourism sector’s hotels and restaurants, as well as for export to the Japanese market.

Thong Rathsak, director-general of tourism development and international cooperation at the Ministry of Tourism, said at the event that the MoU will aid farmers growing vegetables in greenhouses using new Japanese standards and technologies that ensure food quality and safety.

“The MoU focuses on serving the entire tourism industry, including tourism sub-sectors such as agro-tourism, and rural tourism,” he added.

The MoU covers the years 2021-2025 and both parties will continue to discuss projects in addition to this agreement. Rathsak remarked that the first development project will be implemented in the Baray district of Kampong Thom province because the district is rich in irrigation systems, specifically its Stung Chinit irrigation and network of major canals and sub-canals. Expansion of the project across the country will follow its implementation in Kampong Thom province.

Rathsak said 10 varieties of vegetables will be planted with most being land-grown initially.

He added that the Yamato Green’s distribution partners will bring the vegetable crop to market, supplying hotels, restaurants and food courts in the Kingdom’s tourist destinations as well as to the Aeon Malls and other Yamato Green supermarket partners.

Nabeshima Katsuhito, founder and president of Yamato Green, said that his company will manage the production, packaging and distribution processes across the country as well as exports to both foreign countries and Japan.

He pointed out that Japanese interest in Cambodian products is high because the Kingdom’s farmers use very few chemical fertilisers in growing crops, an important benefit in the eyes of Japan’s health-conscious consumers.

“The issue we can assist with is that while traditional cultivation methods produce crops high in quality and safety, they also deliver a low yield with significant loss to insect attack. Therefore, Yamato Green wants to participate in developing the agriculture sector in Cambodia by helping boost production yields and improve links to the market while maintaining the high quality and safety of the Kingdom’s vegetables,” Katsuhito said.

He added that Japanese people have great trust in Cambodian products, especially the products labelled “Made in Cambodia”.

Rathsak noted that once the COVID-19 crisis passes, global tourism will return to normal and that demand for food in hotels, restaurants and restaurants will rise.

The ministry will encourage farmers to grow crops using Japanese technology and will facilitate farmers’ products being distributed to tourism areas as well as promote the high quality and safety of domestically grown vegetables and fruits in tourism destinations across the country including Siem Reap, Battambang, the coastal areas the and northeastern parts of the country.

The Ministry of Tourism will additionally co-organise those efforts throughout traditional tourism, agro-tourism and rural tourism regions. This will ensure that tourists can taste, cook and eat while visiting with confidence.

According to a report from the General Directorate of Agriculture (GDA) at the Ministry of Agriculture, in 2019 Cambodia had 57,262 hectares of vegetable plantations across the country and produced approximately 682,012 tonnes of food.

However, the demand for vegetables is about 1 million tonnes yearly, somewhere between 2,500 and 3,000 tonnes daily. Because Cambodia is not self-sufficient in vegetable production, it imports an average of 500 to 1,000 tonnes per day in order to meet local demand.

Imported vegetables are undocumented with no clear source of origin identified and no proper checks on their fitness for human consumption, presenting a potential public health hazard, said the GDA. Khmer Times