Siem Reap major road project to be completed by 2022 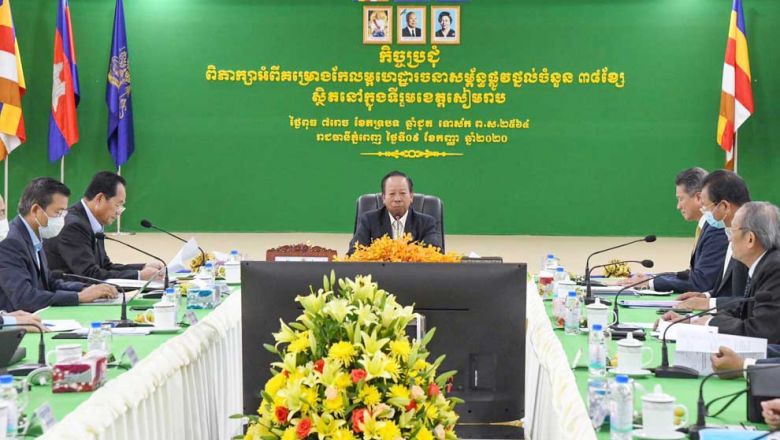 Siem Reap major road project to be completed by 2022

Blueprints for a Siem Reap construction project to build or fix 38 roads totalling 98.34km are due to be unveiled on September 23. The project is scheduled to be completed in late 2021.

The deadline was set on Wednesday by the Ministry of Public Works and Transport (MPWT) and led by Tea Banh, the chairman of the inter-ministerial committee in charge of the project.

The meeting was attended by Minister of Land Management, Urban Planning and Construction Chea Sophara, MPWT Minister Sun Chanthol and senior officials from the Ministry of National Defence.

Banh advised the task force in charge of designing the roads to reach a technical consensus to ensure that the construction is high quality and sustainable.

A Facebook post of Prime Minister Hun Sen on September 4 announced that the government will spend $150 million to rebuild the 38 roads in Siem Reap.

“Although our nation is facing Covid-19, it doesn’t affect development. The big and small roads planned to be built in this town will help raise the living standards of residents. The roads will also help stimulate economic growth,” Hun Sen said.

He said he would preside over the opening ceremony of the construction and said late next year, people will see clean roads on the land of Angkor.

Hun Sen also thanked the contributions of all institutions. He said they didn’t waste their money because the government saved more than $600 million to develop the country.

“The restoration of this infrastructure is to turn an unprecedented new page in the roads that cross Siem Reap.

“This leads the government’s attention – to transform a town of diverse cultures into a tourist attraction with more investments in line with our development policy,” he said.

MPWT spokesman Heang Sotheayuth said on Thursday that all members of the inter-ministerial committee and relevant sides will take up plans and detailed blueprints for discussion at the September 23 meeting.

“The meeting will be held a day after the Pchum Ben festival, and we will ask permission from the senior leadership to open a construction site soon,” he said.