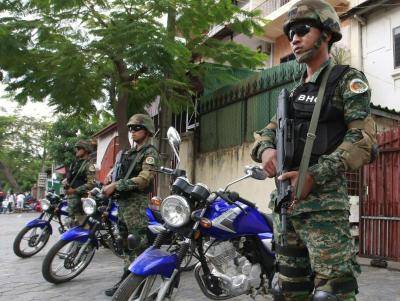 Cambodia has formed a committee to oversee security matters during the Asia-Europe Meeting (Asem), which will be held in Phnom Penh in November.

To guarantee the safety of all participants, the government said nearly 13,000 soldiers have been assigned to the event.

The 13th edition of Asem will be held on Nov 16-17 at the Overseas Cambodia Investment Corporation (OCIC) building in Chroy Changvar.

On Friday, National Police chief Neth Savoeun and Hing Bun Heang, the deputy commander of the Royal Cambodian Armed Forces and chief of the Bodyguard Unit, led a meeting to prepare security measures for Asem.

A press release issued after the meeting confirmed the establishment of a “sub-committee for security, order and rescue” chaired by Savoeun.

“A total of 12,726 forces will join the operation to protect Asem.

The committee leading the meeting demanded maximum effort and resources to protect the 13th Asem.

“The committee is now strengthening its capacity to receive and collect information and studying its strategy for the summit, ” the press release said.

When asked about the spread of Covid-19 in the Kingdom and how it might affect security measures at the event, Ministry of Interior spokesman Khieu Sophea said,”I don’t have that information yet.”

On Jan 31, the government formally announced that Cambodia will be hosting Asem this year.

Foreign Ministry spokesman Kuy Koung could not be reached for comment on Sunday. – The Phnom Post/Asia News Network