Great Hornbills spotted in Phnom Penh may be a good sign 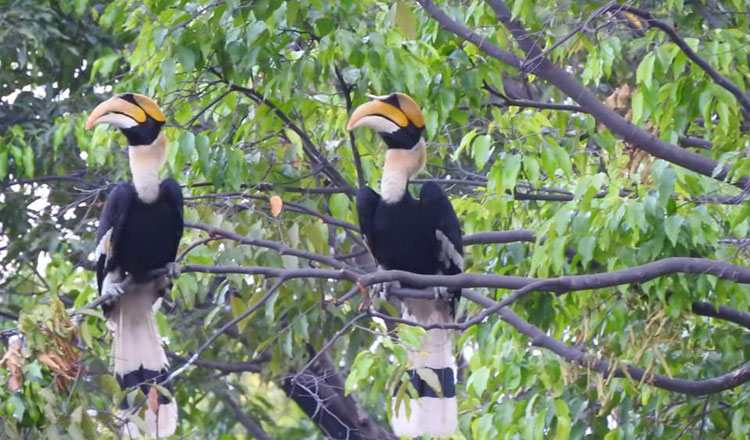 Great Hornbills spotted in Phnom Penh may be a good sign

In some part of the region hornbills are considered emblematic of a divine spirit.

Having a hornbill fly over a household is a sign of good fortune to come.

If that is the belief, then people in Phnom Penh can expect the spirit to shower good fortune over them as for the last six months, 10 pairs of the great hornbills have been spotted over the capital.

Many people have seen them flying around Phnom Penh, especially at the Botum Vatey pagoda that reflects in the calm water of Wat Botum Park near the Royal Palace.

The great hornbills were seen flying to eat fruits near the riverside and people who live in the area when interviewed by Khmer Times recently said that it was a spectacular sight to behold every morning.

According to a riverside street vendor who identified himself as Heang, the great hornbills were seen flying for the last six months and there were about 20 of them.

He said these great hornbills were a spectacular sight every day and they looked more tame than wildlife as though someone was keeping them.

“These birds are black with the long, down-curved bill which is brightly coloured. They fly and stay at the top of the trees and buildings,” he added.

A security guard, Panha who works at the riverside told Khmer Times that he saw some 10 pairs over the past few months but now the number had reduced.

The great hornbills, he said, did not scare people and there was one occasion when some youths were seen trying to hit the birds and the police told them not to do so.

However, some people claimed that during the lockdown, the great hornbills were not seen at the Botum Vatey pagoda and it looked like they stayed away.

Many of them when interviewed said that they had never seen the great hornbills before and as though they suddenly flew in from somewhere into the capital.

Asked if they saw the great hornbills so far this month, they said they only saw a few as the birds had moved to another site near the Prek Eng pagoda, around the same vicinity.

A tuk tuk driver who identified himself as Rithy said he saw the birds around 6am when he was waiting to pick up customers.

There are some Cambodians who are of the view if the great hornbills did not come from somewhere then they may belong to Tea Vichet, the nephew of the Minister of Defence, General Tea Banh who is an animal and bird lover.

However, many hoped that these great hornbills will bring good luck to the capital and Kingdom, especially at a time when the nation is hit by the Covid-19 pandemic.

Wildlife Alliance’s wildlife programmes director, Nick Marx told Khmer Times that he did see the great hornbills in Phnom Penh before but is not sure if they belong to anyone.

He said it is an offence under Cambodian law to own a wildlife species unless they are having them with the consent of the government.

The great hornbill (Buceros bicornis) also known as the concave-casqued hornbill, great Indian hornbill or great pied hornbill, is one of the larger members of the hornbill family. It is found in the Indian subcontinent and Southeast Asia. Its impressive size and colour have made it important in many tribal cultures and rituals. The great hornbill is long-lived, living for nearly 50 years in captivity. It is predominantly frugivorous, but is an opportunist and will prey on small mammals, reptiles and birds too.

The great hornbill is a large bird, 95–130 centimetre long, with a 152 centimetre wingspan and a weighs two to four kilogrammes.

The most prominent feature of the hornbill is the bright yellow and black casque on top of its massive bill. The casque appears U-shaped when viewed from the front, and the top is concave, with two ridges along the sides that form points in the front, whence the Latin species epithet bicornis (two-horned). The back of the casque is reddish in females, while the underside of the front and back of the casque is black in males.

Hornbills are said to be one of Asia’s most attractive birds. Large, colourful, and easier to spot than most other birds, hornbills have become iconic animals in the tropical forests of Asia. They are said to be fruit-eaters and play an important role in dispersing the seeds of tropical trees, thereby keeping forests healthy and diverse.

Great hornbills are widespread throughout the continent of Asia, including China, India, Cambodia, Thailand, Vietnam and Indonesia. It is more frequently found in the canopy of thick forest, although has been known to venture out to more open areas for food. This species has been found as high as 1,560 metres. Khmer Times