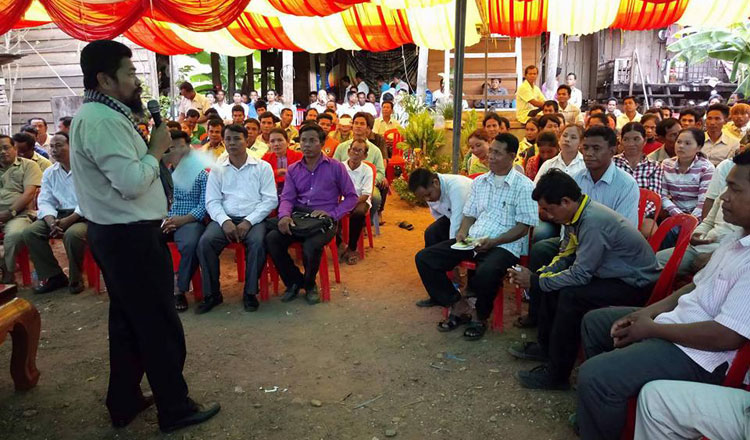 The newly-created opposition Cambodia Reform Party (CRP) is targeting former senior members of the court-dissolved Cambodia National Rescue Party (CNRP) to join it ahead of the upcoming Commune Election, saying the only way to challenge the ruling party is for the opposition to be “united”.

However, an academic said the new opposition is not strong enough to challenge the CPP, noting the CRP needs more time to become strong.

Ou Chanrath, one of the founding members of the CRP, said his party’s goal is to unite with the majority of the former opposition party officials and activists.

“My goal is to recruit former CNRP officials,” he said. “Not only that, but we are also willing to gather intellectuals who are outside the political system, especially those who are interested in politics, who previously did not have the opportunity to participate in politics.”

The CRP officially registered with the Ministry of Interior in March, with the aim to compete in the Commune Election next year. The logo of the CRP has a similar design to the ex-CNRP, both with the image of a rising sun and having the same official motto: “rescue, serve, protect”.

However, the CRP has added the head of a white elephant holding three lotus flowers with its trunk.

Chanrath admitted the similarities between the two logos but said the rising sun is a different colour and the CRP’s has up to 54 rays while the ex-CNRP’s has only 24.

However, Minister of Interior Sar Kheng has previously instructed that the CRP change the party’s motto “rescue, serve and protect” because it is the same as that of the ex-CNRP, which was dissolved by the Supreme Court.

“We are open to mobilising to compete with the ruling party. We know that our moderate strength cannot get the strong support or confidence of the people,” Chanrath said. “The ruling party is strong enough financially, in terms of human resources, in terms of strength and political power, so we need to unite.”

The question is how the CRP can strengthen its ranks, as many former senior leaders of the ex-CNRP remain under a five-year political ban, while other former politically rehabilitated senior officials have gone on to form their own parties before the CRP was formed early this year.

A total of 118 ex-CNRP senior officials were banned from politics for five years after the party was dissolved. As of now, a total of 22 of them have had their bans on political activity lifted.

Currently, there are four parties that emerged from the ex-CNRP. They are the Cambodia National Love Party (CNLP) headed by Chiv Kata, the Khmer Will Party (KWP) headed by Kong Monika, the Khmer Conservative Party (KCP) headed by Real Camerin and the CRP to compete in the 2022 commune elections and the 2023 national election.

Kin Phea, director-general of the Royal Academy of Cambodia’s International Relations Institute, said yesterday that the CRP needs more time to build its strength, adding that it has not yet become a major party to challenge the CPP.

“I understand that it is not yet time, but anyway, if they can mobilise both former leaders and supporters of the ex-CNRP to join their party, it could be a sign of progress,” he said.

Phea said since the dissolution of CNRP by the Supreme Court in 2017, the leadership of the former main opposition party was split into many pieces, including former CNRP president Kem Sokha’s faction and co-founder Sam Rainsy’s faction.

Both Rainsy and Sokha have expressed no support for the newly created parties, which split from the ex-CNRP. Sokha, who is awaiting trial for “treason” at the Phnom Penh Municipal Court, through his lawyers has asked ex-CNRP officials who have created new parties to avoid linking his name to their parties.

However, Pol Ham, the former first vice-president of CNRP and one of Sokha’s lawyers Phan Chansak were granted “political rehabilitation” from King Norodom Sihamoni after requesting intervention from the government to return to politics.

Ham and Chansak have said they are willing to join CRP. Ham, a prominent veteran politician, is being proposed to become the CRP president to challenge the ruling CPP.

However, Phea noted that uniting former CNRP officials is a good move but it is “impossible” to compete against the CPP.

“I see that Pol Ham, as well as Ou Chanrath, are not prominent characters or idols or symbols of the former opposition party. They are just ordinary officials who do not stand out or get a lot of attention, especially from supporters,” he said. “They need more time to become a symbol of the opposition.”

Chanrath said he is gradually talking to some key officials who are considering joining CRP. He said besides Ham, there are several other ex-CNRP officials, including former lawmaker Tep Sothy, who are willing to join the party.

“Therefore, mobilisation is an important goal for us now to reach the challenge of the Commune Council Election as well as the National Election,” he said.

The CPP recently welcomed the move, saying it wants viable challengers to participate in the upcoming elections.

Asked if the CRP under the leadership of Ham could threaten or change the result of the elections, CPP spokesman Sok Eysan said it is not worried about the move at all.

“Joining the CRP, whether he wins the election or not, he has a future in a wide range of political activities,” he said. “He cannot be a threat to the (CPP) or change election results. Voting will run smoothly and the results will be confirmed as usual.”

Eysan said the CPP always welcomes “potential competitors” no matter if they can or cannot win seats for commune positions as well as National Assembly seats.

“It’s a citizen’s right to choose, we cannot predict. We welcome you back to the game of democracy in Cambodia. We wish there are potential competitors,” he added. Khmer Times