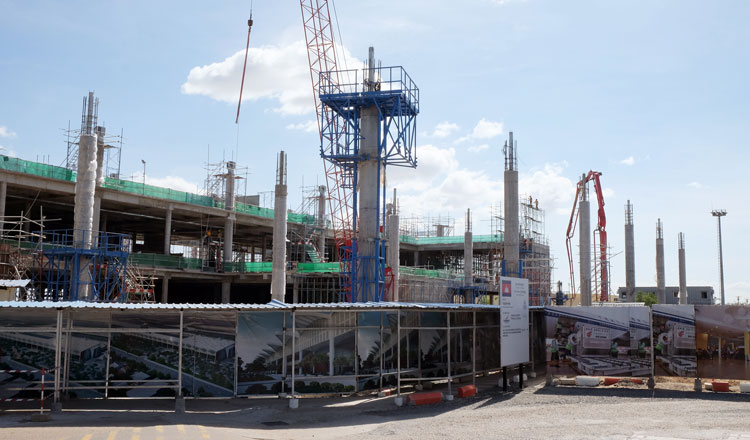 The construction of the $1.5 billion new Phnom Penh Airport was 40 percent complete as of May and proceeding as planned in the face of the deadly Coronavirus pandemic, authorities said.

The airport is being built in Kandal province and a part of Takeo province. It is set to start operations in 2023.

“Once the new airport is completed and in operation, it will provide an economic boost to Kandal province as well as to Cambodia as a whole because the airport is one of the largest in the region and will handle more tourist passengers to Cambodia,” Sophorn said.

Announced officially in 2018, the 4F-class New Phnom Penh International Airport is constructed across more than 2,600 hectares of land in Kandal Stung district and Sa’ang district in Kandal province and a smaller part of Takeo province.

The 4F class airport is the highest in the class of airports. The 4F-classification allows the take off and landing of all sizes of aircraft.

The new international airport will replace the existing Phnom Penh International Airport, with initial plans having the facilities being constructed on partially reclaimed land adjacent to Boeng Choeung Loung, a large lake in Kandal province about 30 kilometres south of Phnom Penh.

The new Phnom Penh International Airport is being funded by local firm Overseas Cambodia Investment Corporation (OCIC), which has a 90 percent stake in the project with 10 percent belonging to the state-run State Secretariat of Civil Aviation (SSCA).

“We are aware that the pandemic has disrupted many projects and the economy, but the construction of the airport in Kandal province and other airport projects in the country have been on schedule,” SSCA spokesman Sin Chansereyvutha said.

Earlier this year, the OCIC announced its project to build flyovers connecting the new airport and the centre of Phnom Penh.

The flyover project will cost around $400 million and construction of its first phase will begin next year.

Chansereyvutha said the construction of Dara Sakor International Airport is expected to commence later this year or early next year.

The company is currently in the process of applying for airprone certification, one of the essential requirements before an airport can be given the green light.