Boosting Tourism from India to Cambodia Discussed with Envoy 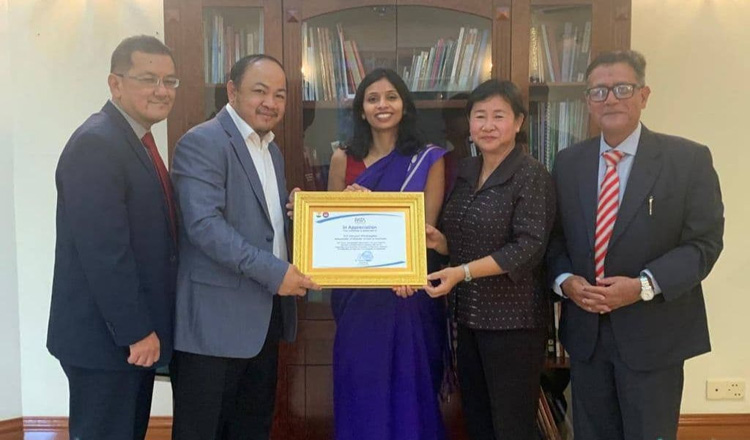 Boosting Tourism from India to Cambodia Discussed with Envoy

Representatives of the Pacific Asia Travel Association (PATA Cambodia) and the Indian ambassador to Cambodia have met to discuss the boosting of tourism between the two nations. The meeting resulted in the proposing of the establishment of both direct flights and a travel bubble.

Devyani Khobragade, Indian ambassador to Cambodia, said that various topics were discussed in the meeting with Dr Thourn Sinan, chairman of PATA Cambodia, but focused primarily on how the association and the Indian Tourism Authority can boost bilateral tourism during COVID-19 and the post-pandemic era.

Devyani sees post-pandemic travel as likely to increase the number of Indians visiting Cambodia in order to experience the Angkor Wat temple as well as the Kingdom’s many other popular heritage and eco sites and nature areas.

She also expressed interest in exploring the potential for India’s meeting, incentive, conference and exhibition industry (MICE) and wedding market sector to look to Cambodia as a hosting venue.

Both parties acknowledge that establishing direct flights between the two countries would be the key step in strengthening connectivity between the two nations as it would save significantly on travel time.

Sinan said that PATA Cambodia suggested the development of a proposal for the establishment of a travel bubble. It also proposed the preparation of an Indian market insight paper so PATA Cambodia members with an interest in exploring that market can glean a better understanding of it. He added that globally, China and India are among the two most desirable tourism markets courtesy of their large populations.

He noted he has seen a lot of commitment previously from both the government and from former Indian ambassadors in the push for direct flights, but to no avail as of yet. PATA has also observed that Cambodia does not have a wide awareness as a tourism destination in India, despite its having been visited previously by up to 100,000 Indian people annually, mostly for religious purposes. Sinan added that if there are substantially more people on incoming flights from India than the return flights, then direct flights will not be sustainable.

Ministry of Tourism’s Secretary of State Top Sopheak said that because global travel remains locked under strict travel measures to prevent the spread of the virus, Cambodia is seeing almost no international tourists these days. Therefore, the government has been promoting domestic tourism to push the economy, but that makes up just part of the loss in tourism caused by the pandemic.

“We thought that through our scenarios [it is possible that] the tourists will be back by mid-2023, or by the end of 2024. However, we cannot assume that tourism will boom once there are vaccines. It will recover step-by-step and take years to do so. At the same time, we are training our human resources to strengthen the quality of services to welcome tourists once they do come back,” Sopheak added.

During 2020, Cambodia received only 1.31 million foreign tourists, a drop of 80 percent compared with 2019. In 2019, Cambodia welcomed around 70,000 tourists from India. However, last year Indian tourist visits to Cambodia reached only about 13,000.