Exports climb 20% on $14B worth of Cambodian goods 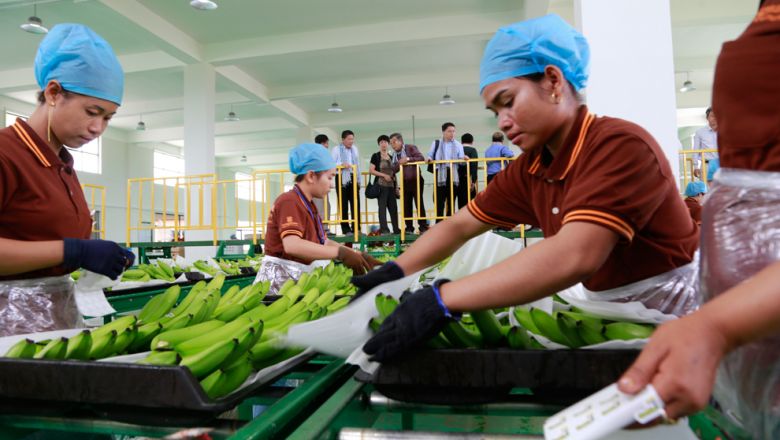 Exports climb 20% on $14B worth of Cambodian goods

Cambodia exported $14.1 billion worth of goods in the first nine months of this year, up 20.07 per cent from the same period last year, despite Covid-19’s production-chain disruptions and its impact on global demand, the Ministry of Economy and Finance reported.

Topping the list of export items were milled rice, bicycles, electrical appliances and agricultural products such as legumes, cashew nuts and yellow bananas, according to the report.

Cambodian Rice Federation (CRF) secretary-general Lun Yeng said milled-rice shipments were to the tune of $328 million in the January-September period, representing 24 per cent of the total.

He expressed his optimism that the Kingdom’s milled-rice exports would remain on a strong growth trajectory until the end of the year, despite Covid-19.

“Our milled-rice exports will not be affected and demand will remain high at year’s end; it’s just that our challenge now is to compete with international market prices now that Thai milled rice has seen a steep decline,” Yeng said.

Meanwhile, the Kingdom’s bicycle exports totalled more than $379 million during the first nine months, up 28.92 per cent compared to the same period last year, the state media service Agence Kampuchea Presse (AKP) reported, citing data from the Ministry of Commerce.

He said: “Minister of Commerce Pan Sorasak sent a letter to all buyers to continue accepting ordered goods from Cambodia.

“Cambodia has retained its capacity to produce despite the Covid-19 situation. Thank you to all the buyers for accepting the minister’s request.”

Cambodia Chamber of Commerce vice-president Lim Heng highlighted exports of agricultural products, bicycles and travel products to the US and European markets as drivers of growth during the first nine months of this year.

Strong overall growth notwithstanding, Heng pointed out that exports to Japan fell by nearly six per cent.

“During the Covid-19 pandemic, demand for goods – especially our agricultural products – increased. I believe our exports will continue to grow well by the end of the year.

“And when we implement the bilateral free trade agreement [FTA] between Cambodia and China next year, that will further boost national economic growth,” he said.

Cambodia and China signed the bilateral FTA on October 12 following three rounds of negotiations held between January and July.

The Kingdom imported $13.6 billion worth of goods in the first nine months of this year, dipping 8.70 per cent year-on-year, finance ministry data show.